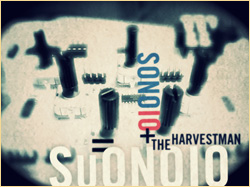 Alessandro Cortini and Scott Jaeger (The Harvestman) have collaborated to create a fully functional synthesizer called the SuONOIO.

SuONOIO is derived from Italian, suono io = i make sound.

The SuONOIO is portable, thanks to its battery powered operation and built-in speaker. In addition to the immediate feedback of the built-in speaker, SuONOIO features a 1/4″ output that makes it easy to be integrated with your favorite pedals, processors, amplifiers and more.

“Multiple SuONOIOs can be patched together if you decide to become a shut in or a professional concert SuONOIO-ist,” notes Cortini.

Here’s an audio preview of SuONOIO, via Cortini:

The SuONOIO utilizes sounds found on Cortini’s SONOIO album and allows you to reshape them into new sounds, rhythms, textures and drones.

If you’ve tried out the SuONOIO, leave a comment with your thoughts on it!