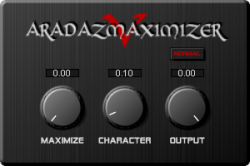 After 5 months trials and errors of making loudness maximizer vst, the algorithm which I’m looking for is finally found. I’have reworked the previous AradazMaximizer5 and I still use that name for this new maximizerVST plugin.

AradazMaximizer5 Reworked Version has better performance of limiting audio signal. It has no pumping effect, easy to use, simple and free.

Aradaz Maximizer 5 is available now as a free download for PC and Mac (VST/AU).

One thought on “Free Loudness Maximizer Effect For Mac, Windows”