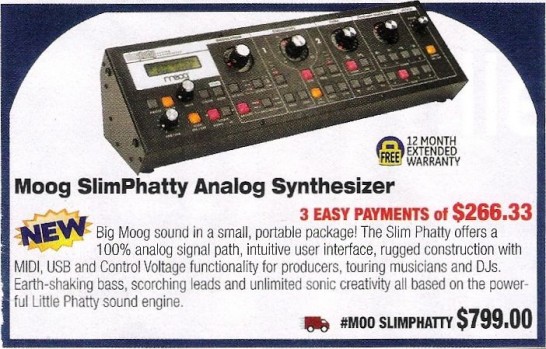 The Moog Slim Phatty, just moved from rumor status to blurry-cam status, is a new rack-mountable version of the Moog Little Phatty synthesizer.

It hasn’t officially been announced, but this photo has leaked out, via the Fall American Musical Supply catalog, along with this short blurb:

The Moog Slim Phatty is reportedly priced at $799. This is about $700 less than the Little Phatty keyboard, making it a pretty killer price for a real analog Moog synth!

None of this info on the Moog Slim Phatty is official yet. We’ll let you know as soon as the official specs are announced.

In the meantime, though, check it out and let us know – are you interested in a Moog synth for $799?