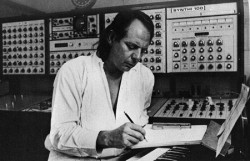 Back in 1995, classical composer and electronic music pioneer Karlheinz Stockhausen (22 August 1928 – 5 December 2007) took the time to give a listen to some then-current tracks by Aphex Twin, Plasticman, Scanner and Daniel Pemberton.

While his comments are a few years old, they’re worth reading for his perspective.

Stockhausen had these music tips for the artists:

I wish those musicians would not allow themselves any repetitions, and would go faster in developing their ideas or their findings, because I don’t appreciate at all this permanent repetitive language.

It is like someone who is stuttering all the time, and can’t get words out of his mouth. I think musicians should have very concise figures and not rely on this fashionable psychology. I don’t like psychology whatsoever: using music like a drug is stupid.

One shouldn’t do that: music is the product of the highest human intelligence, and of the best senses, the listening senses and of imagination and intuition.

And as soon as it becomes just a means for ambiance, as we say, environment, or for being used for certain purposes, then music becomes a whore, and one should not allow that really; one should not serve any existing demands or in particular not commercial values. That would be terrible: that is selling out the music.

In addition to Stockhausen’s general reactions to the state of art in edgier electronica, he had comments on the specific artists and their work.

I heard the piece Aphex Twin of Richard James carefully: I think it would be very helpful if he listens to my work Song Of The Youth, which is electronic music, and a young boy’s voice singing with himself. Because he would then immediately stop with all these post-African repetitions, and he would look for changing tempi and changing rhythms, and he would not allow to repeat any rhythm if it were varied to some extent and if it did not have a direction in its sequence of variations.

It starts with 30 or 40 – I don’t know, I haven’t counted them – fifths in parallel, always the same perfect fifths, you see, changing from one to the next, and then comes in hundreds of repetitions of one small section of an African rhythm: duh-duh-dum, etc, and I think it would be helpful if he listened to Cycle for percussion, which is only a 15 minute long piece of mine for a percussionist,.

But there he will have a hell to understand the rhythms, and I think he will get a taste for very interesting non-metric and non-periodic rhythms.

I know that he wants to have a special effect in dancing bars, or wherever it is, on the public who like to dream away with such repetitions, but he should be very careful, because the public will sell him out immediately for something else, if a new kind of musical drug is on the market.

So he should be very careful and separate as soon as possible from the belief in this kind of public.

The other is Robin Rimbaud, Scanner, I’ve heard, with radio noises.

He is very experimental, because he is searching in a realm of sound which is not usually used for music. But I think he should transform more what he finds.

He leaves it too much in a raw state. He has a good sense of atmosphere, but he is too repetitive again. So let him listen to my work Hymnen. There are found objects – a lot like he finds with his scanner, you see. But I think he should learn from the art of transformation, so that what you find sounds completely new, as I sometimes say, like an apple on the moon.

Then there’s another one: Daniel Pemberton.

His work has noise loops: he likes loops, a loop effect, like in musique concrète, where I worked in 1952.

Pierre Henry and Schaeffer himself, they found some sounds, like say the sounds of a casserole, they made a loop, and then they transposed this loop. So I think he should give up this loop; it is too old-fashioned. Really.

He likes train rhythms, and I think when he comes to a soft spot, a quiet, his harmony sounds to my ears like ice cream harmony. It is so kitchy; he should stay away from these ninths and sevenths and tenths in parallel: so, look for a harmony that sounds new and sounds like Pemberton and not like anything else.

He should listen to Kontakte, which has among my works the largest scale of harmonic, unusual and very demanding harmonic relationships. I like to tell the musicians that they should learn from works which already gone through a lot of temptations and have refused to give in to these stylistic or to these fashionable temptations.

What do you think of Stockhausen’s tips for electronic musicians?