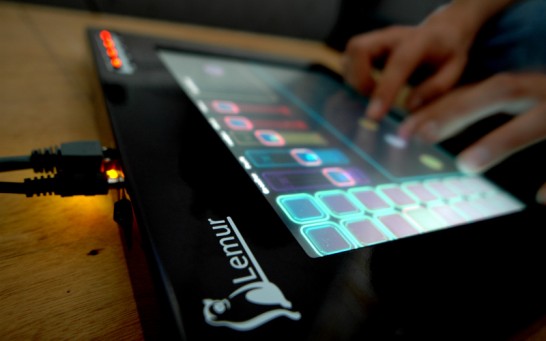 Stantum Technologies has announced that the JazzMutant Lemur – the gorgeous multi-touch music controller – is dead.

Here’s the text of their announcement:

Since 2002, JazzMutant has been a acknowledged pioneer in the field of Creative Computing and Multi-touch technology, being the first-ever company to develop and bring to the market a product featuring a multi-touch screen as early as 2005. Since its market launch, the Lemur has been endorsed by a fascinating community of music and video artists. Nine Inch Nails, Richard Devine, Hot Chip, Ritchie Hawtin, Matthew Herbert, M.I.A, Mike Relm, Alva Noto, Ryuchi Sakamoto, Daft Punk, Bjork, … : The list of prestigious and influent artists who have made the Lemur their favorite pet companion on stage would be way too long to be mentioned here. Its visionary concept and groundbreaking technologies allowed the Lemur to win numerous international press awards and was recently elected “Innovation of the decade” by Future Music.

During five years and despite the new fever surrounding touch technologies, the Lemur remained the only Multi-touch device capable to meet the needs of creative people. From now on, this ecosystem is evolving quickly : powerful consumer tablet devices are becoming mainstream, bringing the power of multi-touch to everyone. In the meantime, JazzMutant, renamed Stantum in 2007, has become a technology-centric company and developed partnerships with tier-one industrial partners to speed up this democratization. As a result, the need for a high-end dedicated hardware is doomed to vanish in the near future. This is why Stantum is announcing today that it will close its JazzMutant activity unit and stop selling its legendary Lemur Multi-touch hardware controller at the end of December while the stock lasts!

Stantum goes on to say that they’re having a fire sale on the Lemur.

Unfortunately – the Lemur is dying just about the most painful death possible:

It’s a sad end to a platform which, just 5 years ago, seemed like the future.

With the announcement, not only does the Lemur hardware die, but the platform itself reaches a dead end.

What Killed The Lemur?

Did the iPad kill the JazzMutant Lemur?

Many would jump to that conclusion. The Apple iPad is less than half the price of the Lemur, yet can run software that makes it comparable. And when you’re not using it as a music controller, the iPad can run other music apps, browse the web and thousands of other things.

But the Lemur may have doomed itself with its relatively closed platform. The Lemur was sexy – but forced you to do things its way. And one of the most interesting music technology trends of the last few years has been the rise of malleable music platforms, like the monome.

What do you think about this news? Is the “end-of-life” for the Lemur an inevitable side effect of technology change or do you think the Lemur did itself in?

35 thoughts on “JazzMutant Lemur Dead – Did The iPad Kill It, Or Was It Suicide?”