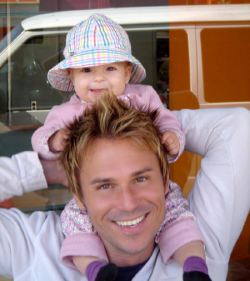 BT has shared his thoughts on getting nominated for the 53rd annual Grammy Awards for Best Electronic Album, for These Hopeful Machines.

His response to the nomination is surprisingly raw and personal. He talks about being inspired by some of the greats of popular electronic music as a 13-year old kid and how that inspiration has continued to drive him over the years.

Whether or not you’re a BT fan, we think you’ll find something inspirational in his story.

Because of this, and because we think it’s a story that many readers will be able to relate to on some level, we’re embedding BT’s story below.

See his full post on his Facebook page, and let us know what you think of his story, too.

BT on My Greatest Honor

This story begins on February 26, 1985. Music and images from the Grand Shrine auditorium in sunny Los Angeles California flickered to life, flying by primitive means from antennas through the airwaves to set-top boxes across the United States. Small resonant frequencies bouncing through the air to a family television with rabbit ears, in a small town nestled in the suburbs of Maryland; a town named Rockville.

The temperature was in the lower forties that day and raining. I was a hopeful, bright, awkward thirteen-year-old student of the arts. In those first thirteen years of my life, I’d been avidly devoted to the study and practice of music. I’d played innumerable Chopin Etudes (my favorite still being Op. 25 No 7 in C#) and studied composition and theory under the guidance of Setirios Vlahopolis at the Washington Conservatory. Each summer I mowed lawns to buy my first synthesizers and drum machines. As a very young boy, my love of music absolutely consumed me. From the age of four onwards, I was devoted completely to unraveling the complexities and beauty of anything my ears could hear. Music was (and still is), my safe place, my first love, my awe and wonderment and my silence.

On that foggy evening 25 years ago, a spark was lit in my thirteen-year-old heart that I carry with me to this very day. I saw four modern masters of my instrument, using the most cutting edge technology of the times, innovating and propelling the medium forward in a single, monumental push. I watched this monolithic event in awe. Those men are Herbie Hancock, Howard Jones, Thomas Dolby and Stevie Wonder. That performance, sandwiched just before a commercial break, sculpted an entire universe of possibility and hope in my adolescent heart. It is the moment that made me believe it is possible to be embraced and honored for accomplishment and innovation, and better yet by a group of your peers. At that moment, anything became possible.

I returned to the halls of Tilden middle school the next day with an ineffable spark that remains in me still.

It’s amazing how we all have defining moments such as these, that shape the very topography of our person. It’s also amazing that it sometimes takes years to see the beautiful lines of elevation, longitude and latitude that we have become manifest and connect from such simple things.

Flash forward a few years. I studied earnestly, forfeiting a social life for arduous practice and devotion to all things music. I was accepted to the Berklee School of Music at the age of fifteen. Not long after, I got a one-bedroom apartment in L.A.’s San Fernando Valley. With a mattress on the floor and a diet consisting solely of packaged ramen noodles, I made my demo tapes and submitted them all over town. I was shot down a thousand times by record labels and A&R people that didn’t understand, or if they did, didn’t care.

But I did. And I stayed the course. Even in the mid-90s, when finances forced an L.A. sabbatical and return to my parent’s house in Maryland, I did not quit. Putting blinders on to the reality of my daily life, I poured myself into music. I attended lectures and read Keyboard as though it were a sacred text. I built instruments in my bedroom, studied coding, practiced Hannon exercises and kept my ear to the ground with anything happening in modern music. As far as career, however, nothing was happening.

Then something did. On blind faith, I sold my clunker car and started a record label with my childhood friend Ali Shirizinia. I made a record called Embracing the Future, and that record found its way across the waters to England where people were actually interested. I met DJ Sasha who was playing my records across the U.K. and began to began to visit there, returning several times to record and perform, until eventually I got my first record deal in 94’ signing to Warner Music in the UK. By this time, my first album IMA was completed. IMA was primarily an instrumental album containing protracted and elongated compositional forms that were described as “lush and dense” and “dripping with years of study”. But audible to me were also the years of hope and deliberation that were finally beginning to bear the first buds of fruit.

By 1999, desire to compose music for motion pictures landed me back in California. I landed a big Hollywood manager and scored film after film and produced project after project, the months becoming a blur of marathon work sessions. Steadily over time, the projects became bigger and more influential. Almost all of the money I earned was reinvested it into my work; creating new technologies, proprietary software, hand made instruments and the like. While scoring films was fine, my great and ongoing desire was (and still is) to push forward the use of electronics as a medium for human expression into the mainstream to be appreciated by all. I longed to be additive.

Then in the middle of all this, something beautiful and unexpected happened. I found out I was going to be a father. It was then I made a very conscious and life changing choice. I chose to return to Maryland and raise my daughter in a simple place, where she could flourish and be a child. At the height of my “climb” I left the fast track of Los Angeles. After almost fifteen years of purposeful work and diligent innovation, I walked away.

It is not to say my work did not continue, it did. It was just now crammed into the wee hours of the night, after my little girl was fed, bathed and read to, and finally sound asleep. For those sleepless years and through a period of incredible personal heartache and conflict, the themes and meaning in my work deepened. My heart grew in a way I did not know was possible at that time. My life and my work became an expression and devotion to my daughter, and to the idea that hope and perseverance have meaning. I also developed a deepening compassion for the human condition. I began to see that music is one of the few voices that soothes all our common struggles. I wrote from that place.

While I lived in Los Angeles I proudly served for NARAS on the board of governors. I pushed hard to forward the acknowledgement and understanding of electronic music and culture. I petitioned the board for a Best Electronic Album category. I wrote a thesis about it, met with my peers and friends, and with pride and enthusiasm I worked to convey why our music and community matter. I employed bands and artists to submit their works. Through those years of prodigious effort and struggle, that hope in me never died. As the years went by however, the prospect for acknowledgement by my peers waned and eventually after many years grew silent.

On Thursday December 2, 2010 at 6:50am (UK time), I landed in London. Prior to my flight it had been a long day of school runs and I couldn’t for the life of me figure out if I was supposed to get the shrimp for the teacher conference or not. Did I remember to pack my daughters ballet slippers for Nutcracker rehearsal? I didn’t know. My psoas and left shoulder were killing me (as they usually are after twenty years of flying) and I couldn’t imagine how I would manage to perform in India for the next 4 days. I was deeply exhausted and overwhelmed.

When we touched down, I quickly turned on my phone to call my daughter, but my phone was going haywire. It was like every text message in the world had mistakenly come to my phone. They were too fast to read, hundreds filed in, one after another. I finally interrupted them and saw a message from my best friend (of over twenty years now).

It said, “Brian, you did it. You’ve been nominated for a Grammy!!”

There are some moments that are impossible to explain and the next hour after this moment is kind of a blur. What I do remember, I will share here.

Silence and then inconsolable tears.

I wept from the place of that thirteen-year-old kid with a dream. It was as if all of the years of work and struggle, hope and diligence had converged in to this one moment. I felt as though my peers had joined in quiet solidarity to tell me Son, your work has value.

My nomination for Best Electronic Album seemed to resonate with a place in me that hadn’t been opened since I was a child. It was, and is, the greatest professional moment and honor of my entire life. Ever.

Well, they had to help me off the plane. Everyone was saying, “Is he okay?” By the time I was able to get the words out “I’ve been nominated for a Grammy” the entire plane erupted into applause. It literally was nearly as powerful as watching my daughter be born. In some ways more so, just different, very different.

I wouldn’t be truthful if I said I didn’t want to win. I’d also be lying if I said I hadn’t picked out a spot on our little mantle that I could look at a Grammy every day. But, that being said, this is the finish line.

My album These Hopeful Machines, has been nominated for the 53rd annual Grammy Awards for The Best Electronic Album. I proudly accept this nomination as the greatest win of my entire life.

Thomas, Herbie, Howard and Stevie, thank you for providing this one kid from suburban Maryland with a dream. Thank you for innovating and for inspiring me to do the same. Thank you from the bottom of my thirteen-year-old heart.