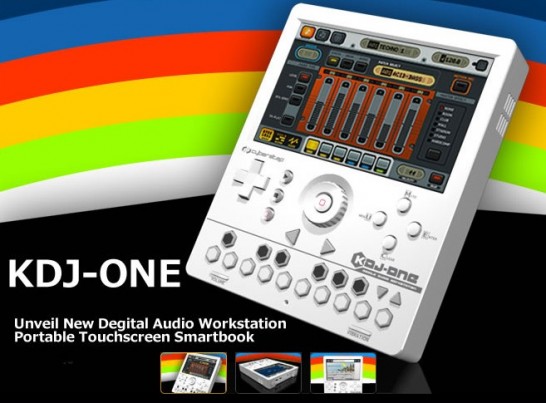 CyberStep has introduced a first of its kind DAW touchscreen smartbook, the KDJ-ONE, featuring an advanced synthesizer, sequencer, and multitrack audio editing with ACIDized WAV support.

Built-in speakers, mic, WLAN, and lithium battery are included to let the KDJ-ONE be used as a portable and wireless handheld production environment.

The KDJ-One also features something unusual for a DAW – a vibration system, which “adds force feedback to your music creating experience”.

At this point, it’s difficult to tell how serious of a device this will be. Their promo image, touting a “degital audio workstation”, has left us wondering.

Check out the details below – and then let us know what you think of the KDJ-One!

ACID formatted samples may be loaded directly into KDJ-ONE’s audio tracks and time-stretched just as in ACID; likewise, patterns created with the KDJ-ONE may be exported directly to ACIDized WAV format.

The KDJ-ONE also features a Unique Song Mode, which allows DJ style mixing of two patterns in real time and may be used as a VST, via built-in wireless LAN; internal settings and data are also editable from the computer.

CyberStep will be exhibiting the KDJ-ONE at 2011 NAMM Show (January 13th – 16th, 2011 Anaheim Convention Center).  We’ll have more details as they are announced.