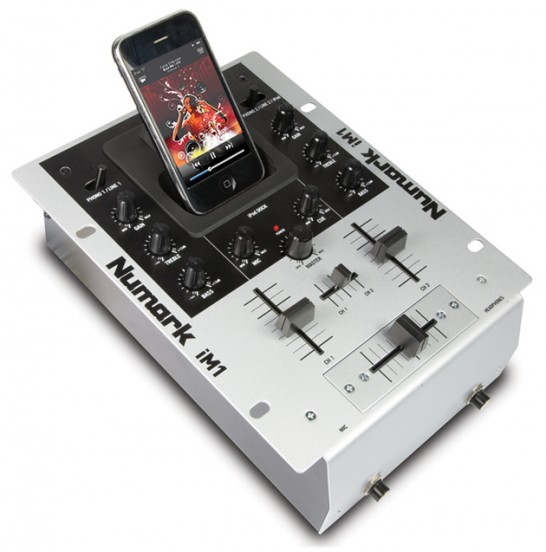 Numark’s iM1, above, packs a wide variety of input types into a compact package.

You can plug in turntables, CD players, line-level music sources and a microphone to the iM1, which also includes a dock for iPod that allows you to play from, or record to, an iPod. Set the levels with trim and line faders, and tailor the high and low frequencies with the rotary EQs on each channel. Cue up tracks using the mini-crossfader and headphone output, and then perform the mix through the master outputs with the smooth, replaceable crossfader. Create professional-quality mix-tapes to pass off to clubs and fans by recording your DJ performances directly to an iPod within the built-in dock. 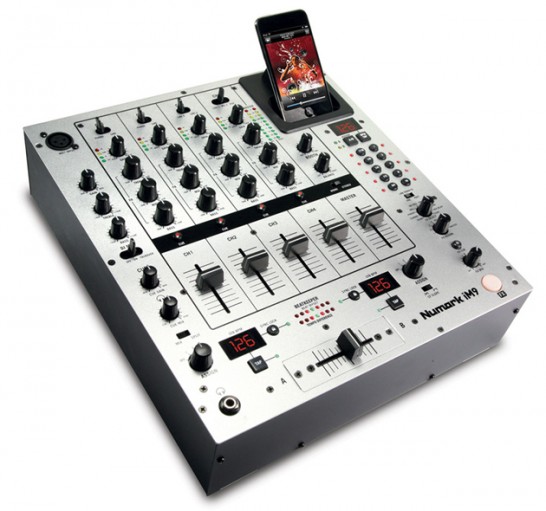 DJs need complete control over how the music sounds and the iM9 mixer delivers that control, no matter the source. With the iM9, DJs can shape the music as needed thanks to dedicated three-band EQ controls for every channel or create on-the-fly remixes and stunning song transitions by engaging iM9’s high-quality, beat synced effects. This level of control is complimented by a pro-grade crossfader, knobs and LEDs.

The unique digital effects processing section of the iM9 brings to your performance an easy new way of applying beat synchronized effects – perfectly. First the BPM is automatically and accurately tracked though the iM9’s built in Beatkeeper technology. This constantly updated BPM serves as the basis for 10 time division preset buttons, which allow the DJ to instantly change the pulse – from quarter note to eighth or sixteenth note, for example – upon which the onboard effects are based. The result is effects that are always in time with the music. Any of the 10 different digital effects can be manipulated and applied to any channel including the iPod or the crossfader or main output.

In addition, DJs can incorporate a vocalist or pump-up the audience with the dedicated microphone channel with XLR input, independent gain control and EQ. A second quarter-inch mic input is included for additional. DJs can even record their performances directly to an iPod, thanks to the iM9’s dock for iPod. Housed in a sturdy metal enclosure, iM9 is designed to withstand the most raucous performances and still make the next night’s gig. DJs with some distance between the booth and the floor will appreciate iM9’s dedicated booth output and adjustment for previewing that puts them right on the dance floor without literally being there. iM9 is ideal for use in clubs or by mobile DJs or just about any DJ using turntables, CDs or MP3s.

“iM9 is a rock-solid mixer,” said Chris Roman, Product Development Manager, Numark. “With iM9, Numark gives DJs a gig-worthy, professional mixer with effects that can record directly to their iPod without compromise.”