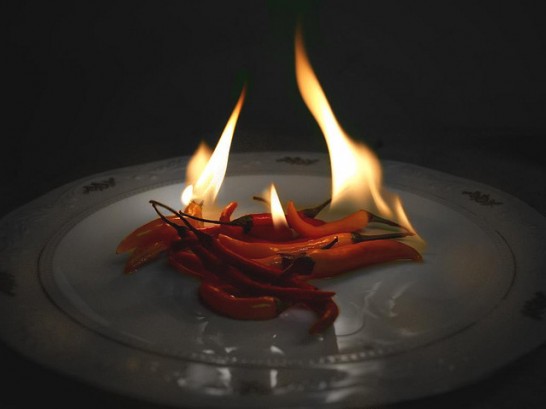 Synthesists Brett Naucke and Beau Wanzer may have come up with the best idea ever: the First Annual Synthesizer Chili Cook-Off.

It’s being held Sunday, Jan 23 at the Empty Bottle in Chicago. Tickets are $3, because otherwise they’d have to make the chili with textured vegetable protein.

Five different artists are going to make chili, and then they’ll play a set on their synths, which is supposed to be a sonic interpretation of that chili.

The chili they make will be distributed during their sets, and people will vote on their favorite, based on both the set and the chili.

Why a Synthesizer Chili Cook-Off?

It’s the wintertime, and it’s super cold, and everyone’s miserable. We just make chili and soups on our own, and we’re both big synth and electronic music fans. We tried to fuse the two together in the most humorous way we could, but also in a way that would possibly work.

Me and [fellow participant] Beau Wanzer basically created it months ago. Both of us would make chilis together in the winter, and we were talking about if it would be possible to fuse synths and chili. It was mostly just a joke at the time, and then we had the idea to do this cook-off, pitched it to the Empty Bottle, and they were into it, surprisingly enough.

Is This The Best Idea Ever?

Could be. Naucke may have actually figured out a way to get people to leave their homes and pay to hear live electronic music.

Better yet, if a set blows, you’ve still got some chili to eat.

Best of all, it sounds like a fun way to get together with other electronic music fans and check out some new music.

Let me know what you think about the idea of holding a Synthesizer Chili Cook-Off.

And, if you’re in Chicago, get a ticket to this thing and let us know when you’ve got the pics to prove that you were there for the First Annual Synthesizer Chili Cook-Off!