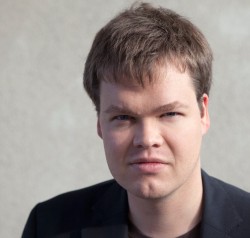 Last week, Apple rejected an update to Audanika’s SoundPrism music app, because of the way Audanika offered MIDI support only as an in-application purchase.

It was a controversial app rejection.

Many agreed with our view, that a “MIDI tax” is a bad for both users and developers, in the long run. Others, though, thought that it should be completely up to developers to decide what they charge for.

So we asked Sebastian Dittmann, right, the CEO of Audanika GmbH, to explain his side of the rejection of the SoundPrism update, to share his thoughts on how Apple could improve their approval process and to explain why it matters.

Synthtopia: First, for context – what’s Audanika SoundPrism, in a nutshell?

Sebastian Dittmann: SoundPrism is an app for iPhone, iPod touch and iPad. It’s an instrument that is based on the idea that arranging notes in a different way than a keyboard helps people not only understand but also use harmonic theory, without having to study it for years. At the same time, accomplished musicians can use it as a new approach to composing.

SoundPrism – by default – arranges notes in a circle of thirds which is embedded in the well known circle of fifths. Every key has a different color and you can scroll through them. We’ve just launched an interactive guide. 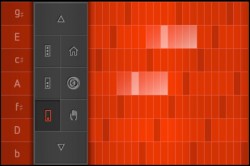 Synthtopia: The latest update to your iPad synthesizer SoundPrism, right, was rejected last week by Apple, because they thought your decision to treat MIDI support as an in-app purchase failed to comply with their developer guidelines.

What are your thoughts on this decision, and how is your company going to respond?

Sebastian Dittmann: It’s Apple’s store, it’s their rules. We’re using their ecosystem to distribute our software and therefore we have to adhere to their guidelines since Apple has the final say in things.

We’re responding by doing what many other developers do – we’re going to release different versions of our app with different feature sets at different price points.

Synthtopia: We agreed with Apple on this decision. We thought that treating MIDI as an optional paid add-on would be be confusing and even aggravating to musicians.

We want developers creating music apps to get paid for their work, but don’t think that a “MIDI tax” is the way to do it. What are your thoughts on this?

Sebastian Dittmann: Before answering your questions, let me say that we only tried to come up with a solution to only have those of our users pay for a feature who actually want it. We didn’t want all of our new customers to pay for something only a small percentage of them actually makes use of.

At the same time we couldn’t just ‘enable CoreMIDI’ like flicking a switch. Our application has some specifics that make it different from other music apps.

In SoundPrism you might want to send out on different Midi Channels with each of your fingers. Also you might be playing the same note at the same time with two fingers or even three or four. SoundPrism is a harmonic instrument which sends out more MIDI notes than a regular instrument. It takes more thought and development resources to implement MIDI in SoundPrism than it would in a regular keyboard application.

Also, I think musicians read the features listed in the description of an app on the App Store before buying it. If the feature they want isn’t listed there they’re free to not buy the app.

Synthtopia: Do you think that Apple needs to give developers more freedom to explore more business models?

Sebastian Dittmann: I think you have to consider the price of applications on the App Store and the amount of work it takes to create a good application. Of course Apple needs to give developers more freedom because the current model won’t work for much longer after the hype about iPads and iPhones wears off.

The typical current business model of selling apps on the App store looks something like this: you create a lot of buzz around an upcoming app, then you release it, get a huge spike in sales and after a week or so it usually goes down to a lower level and stays there. From there on you can either invest in marketing and new features, hoping that you can recreate that buzz or you’ll simply have to release a new application that does something different or a better 2.0 version of your initial app.

Releasing a new app usually generates more revenue than releasing an update to an old application. That’s the reason why many applications don’t see any updates after their initial version. Which is bad in my opinion. We need more quality applications and we need ways to charge for new features, without having to always create a new app.

A very good solution to this are InApp Purchases (IAP) as they are offered by Apple. But implementing a store in an app that uses this IAP framework takes time as well and many developers aren’t up for that.

Synthtopia: We view full MIDI support as a requirement, now, for most serious iOS music apps. Is that realistic, or are musicians asking for something for nothing?

Sebastian Dittmann: That depends on the price of the application. Serious music apps can be relatively cheap  (like Bebot or our own app) and expensive (like Nlog synths, the KORG apps etc.).

From a business perspective, it would be clever for a developer to offer apps for little money or even free to have users try to get those customers who are just looking for something fun to play with for a little but don’t want to invest serious money. And with serious money I mean up to $30 USD which isn’t really a lot, when you compare it to what serious soft- and hardware for musicians costs outside of the iOS ecosystem.

Coming back to the initial question: if the app is on the expensive side, then yes, it should probably offer MIDI out of the box. But then it won’t get introduced to all the casual users who don’t want to pay that much just to have a look.

Sebastian Dittmann: I think Apple needs to add some sort of indication about what’s going on during review.

It’s impossible to find out what’s wrong while you’re waiting for weeks to get a green light from App Review. This time could be used a lot better by developers. Also, App review is not answering questions about possible reasons for a rejection during the time of the actual review. I’ve asked them multiple times via email if they can give me a hint me what the problem is. After 20 days of waiting we just got rejected and pointed to section 11.8 of the review guidelines.

Questions raised by us after the rejection didn’t get answered either.

Synthtopia: Finally, what would you like to see Apple do differently, in order to make life easier for music app developers and to make iOS a better platform for music apps?

Sebastian Dittmann: First of all they need to be consistent.

Our update got rejected because section 11.8 of the Review Guidelines says that you cannot use IAP for “access to built-in capabilities provided by iOS”. Other applications offer saving/exporting features as an InApp Purchase which is exactly the same thing in my opinion.

Then, Apple doesn’t allow developers to charge for updates when at the same time they’re (sometimes) charging for updates to iOS, Garageband and iLife (iPhoto etc.) themselves.

I’m agreeing with this policy of not charging for updates because it’s good for users. It makes them feel safe from getting ripped off which strengthens the platform.

But Apple has to give developers a way to add value to their applications and get paid for it. Nobody needs new applications, when extending existing apps would be feasible, instead. Users don’t, developers hate managing multiple apps if they could stick with one and just focus on that.

There has to be a way to monetize new features, based on ‘features of iOS’. That means developers need to be able to think about a cool implementation of a new feature of iOS, implement it even if it takes a lot of effort and offer it for sale at a price that justifies development costs. And then let the users/customers decide about its success, not Apple.

Every app is based on something that iOS provides. Why does it make a difference if you sell it as part of a new app or within an existing application? Flooding the app store with new apps only makes Apples statistics look prettier but doesn’t help users or developers.

I think that people have a wrong idea about how much it costs to build and maintain a good music app. Also, in your initial article you compared our application to some hardware synthesizer that costs hundreds of US$. SoundPrism costs about as much as a coffee at Starbucks.

The MIDI feature that we tried to sell would have cost a tiny fraction of what any hobbyist pays for VST plugins or DAW software. We already know from our beta testers that they’re having a lot of fun with it, so we’re sure we’re giving users something that’s worth their money.

We’ve built a feature on top of Apple’s CoreMIDI framework and we’ve spent a lot of thought and effort doing that. If you don’t want to pay for that feature – don’t buy it.

Stopping us from offering it to the many musicians who want it and at the same time forcing us to either create a new application or raise the price of our initial one to make up for development costs is just not helping anyone.

Synthtopia: Thanks for taking the time to share your thoughts, Sebastian!

Sebastian Dittmann: Thanks for offering a way to express my views on this matter.