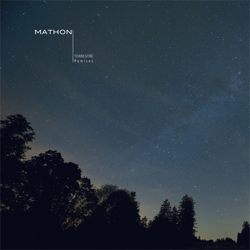 Mathon’s new release, Terrestre, is a unique album, both musically and in terms of the physical format.

Switzerland based Mathon is made up of Thomas Augustiny, Roger Stucki und Pete Leuenberger. They create cinematic ambient music.

The album comes as a vinyl LP + DVD combination. It’s worth noting that the LP is pretty sexy, as it’s pressed in clear vinyl. A DVD is also included, with digital versions of each of the tracks, remixes and videos for several tracks. It’s clear a lot of thought went into the presentation of this release.

The album features 6 tracks, 3 to a side on the LP. The music combines electronic sounds, acoustic instruments & environmental sounds.

Mathon says that “they took their mobile recording-studio into the mountains and they chose the earth as their main theme for the compositions. The coexistence of nature and civilization and also the contradictions between the two can be heard on Terrestre.”

The tracks mix fluttering ambient synth pads with: piano, violin and other instruments; subtle glitch effects and processing; and an assortment of unidentifiable creaks, scrapes and drones. At times, it’s a bit like George Winston had to do a gig in one of the slightly eerie landscapes of Brian Eno’s ambient classic, On Land. Other times, it has more of a meditative quality.

Though the music on Terrestre is described as ambient – it’s not necessarily music you’re likely to put on and ignore. This sonic landscape may make you wonder just what’s in the shadows, behind that tree or over the next hill.

Here’s a preview of one of the tracks on Terrestre, Parsec:

Terrestre is available at the Everest Records site.