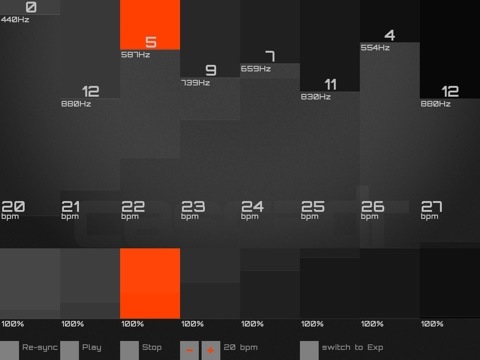 Developer Michael Aldridge has released Cascadr – a unique experimental sequencer for the iPad.

Cascadr experiments with the idea of playing a sequence of notes and a number of speeds – simultaneously. Rather than the sequences being played in time with each other (for example, 30bpm, 60bpm, 120bpm…) they are played at intervals of 1bpm – which generates an interesting cascading effect.

There are eight notes in this sequence, and each note’s pitch can be chosen over a range of 2 octaves (on a chromatic scale) starting from A4 (or 440Hz). It’s also possible to alter the volume of each note, so emphasis can be placed on specific notes. Simply touch the column that represents the value you wish to change and drag up or down. When you change a note or note volume, the change will be heard straight away.

Along with functions for starting and stopping the sequence, there is a ‘re-sync’ function that allows you to restart the sequence from the beginning, meaning that all of the sequences will be put back in sync again.

Plans for the app include:

Cascadr is a free download in the App Store.