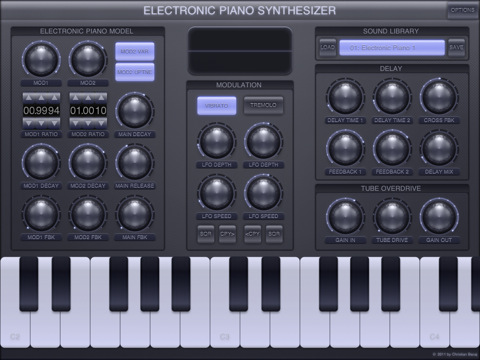 We’ve been advocates for the potential of iOS music making since the release of the original iPhone, and we’ve taken some criticism for it. (Usually along the lines of – ‘You suck!!! Change the site name to AppTopia!!!!”)

But recently, it seems like rarely a day goes by without a developer introducing a powerful music app for iOS, with a good looking interface and lots of features……but with absolutely no mention of MIDI support.

Electronic Piano Synthesizer (EPS) is the world first piano synthesizer for the iPad. Based on a 32bit realtime sound engine, the sounds were computed on the fly, no samples were used.

The EPS gives you possibilities you don´t have with any other Piano or EPiano on the iPad. You can change the sound while you play on the keyboard and hear the changes immediately. That is what you need to tweak your own sounds. The main use for EPS is EPiano sounds, but you can also make sounds like bass, brass , bells, chimes, toms, vibraphone…

But checking out the specs, there’s no mention of MIDI.

We certainly don’t mean to single out Electronic Piano Synthesizer – because it looks like it could develop into an interesting music app. There’s no lack of music apps that could use some MIDI love.

Developers – Synthtopia gets a little over 300,000 unique visitors a month, and about half of our readers seem to be very interested in mobile music apps. That represents a lot of interest in serious mobile music apps. And MIDI support is one of the first things these readers are looking for in your apps’ specs.

If your music app doesn’t support MIDI (or OSC), it immediately gets scratched off the shopping list for a lot of mobile music app users. That $1.99 purchase is no longer a no-brainer.

Got your own thoughts about the state of MIDI support in iOS music apps? Leave a comment with your thoughts….