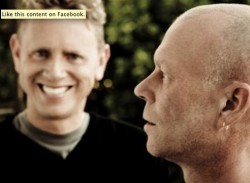 Vince Clarke (Erasure, Yazoo, Depeche Mode) and Martin L. Gore (Depeche Mode) have announced that they are releasing an album as VCMG. It’s the duo’s first collaboration in 30 years.

According to Clarke and Gore, VCMG is an opportunity for the duo to “exercise their lifelong love of the genre as the techno-inspired VCMG.”

“I’ve been getting into and listening to a lot of minimal dance music,” says Clarke. “I got really intrigued by all the sounds.”

“I realized I needed a collaborator,” he adds, “so it occurred to me to talk to Martin.”

“Out of the blue, I got an e-mail from Vince just saying, ‘I’m interested in making a techno album. Are you interested in collaborating?’” says Gore. “This was maybe a year ago. He said, ‘No pressure, no deadlines,’ so I said, ‘OK’.”

What do you think of the idea of Vince Clarke & Martin Gore collaborating again, after 30 years? And is VCMG the world’s first electronic music supergroup?

Clarke and Gore plan to release several EP’s, as VCMG, followed by an album.

EP1/SPOCK will be available starting Nov 30th on Beatport, and in wider distribution on Dec 12. 12″ vinyl hits Dec 19th.