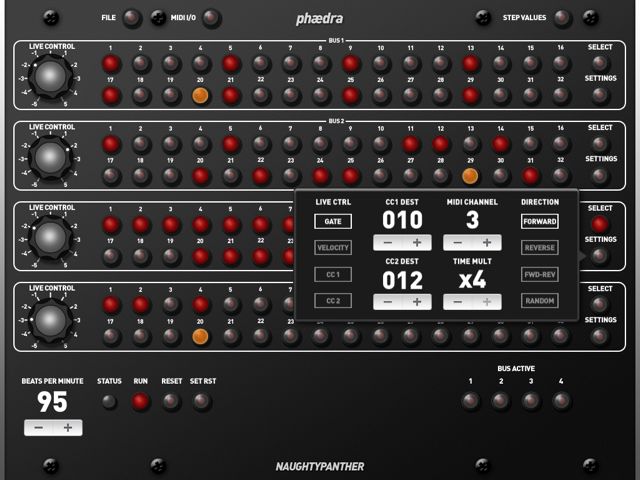 Phaedra is an “analog” style four-channel MIDI sequencer for the iPad. The design of the Phaedra step sequencer is inspired by the Moon Modular 568 Quad Sequential Trigger Source.

Here’s what Randall has to say about Phaedra:

I still have a long way to go, but it is coming along nicely. Each step has note, velocity, gate time, and a pair of MIDI CCs of your choosing. I haven’t yet coded in the chaining feature, but it’ll be able to do 4 x 32, 2 x 64, and 1 x 128 modes. The steps can be 32nd note, 16th note, 8th trips, and 8th note, and each “bus” can run in arbitrary lengths. The “Live Control” knobs on the left can be used to modify one of the four destinations.

I haven’t yet conquered “MIDI background mode,” as used by many iPad synth apps, but I hope to include it, as well as Korg’s WIST. It already does normal hardware MIDI and Network MIDI fine, though, and can clock, or be clocked from, an external source.

No release date has been announced, but Randall says that he hopes to have work on it wrapped up by Christmas.

Here’s a brief demo of Phaedra in its current state:

The demo is pretty basic, considering the current state of the iPad music platform.

The Moon Modular sequencer IS a bad boy, though, so a software version, paired up with a iPad MIDI interface and a multitimbral hardware or software synth, could prove to be a relatively inexpensive way to create a powerful step sequencing set up.