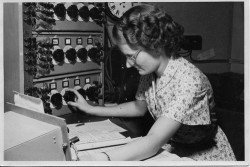 Two years in the making, the 46 track deluxe 4-LP edition features two and a half hours of previously unreleased recordings from Daphne Oram’s archives. None of this material has ever been available before and has been compiled and restored from over 400 tapes before being mastered at Dubplates & Mastering and cut at 45RPM for extra depth.

Daphne Oram, founder of the BBC Radiophonic Workshop, died in 2003 leaving a colossal archive of reel-to-reel tapes and documents behind. This important collection of material eventually made its way to Goldsmiths College, London, who have been administering it on behalf of the Daphne Oram Trust for the last few years. The collection holds over 400 tapes made by Oram during her lifetime, and 211 of those have been archived and catalogued by the college so far.

“The Daphne Oram Tapes: Volume One” is the result of almost two years spent trawling through the archive in an attempt to piece together a coherent document of one of the most pioneering and genuinely experimental characters in electronic music history. Although some of Oram’s recordings have surfaced on the “Oramics” compilation, this set reveals a much more complex, dark, sometimes disturbing and often beautiful body of work which has, until now, been partially obscured by the more recognisable Radiophonic bleeps and whirrs the Workshop is best known for.

This first volume focuses on Oram’s love of experimental forms, of Musique Concrète, of the science and mystery of sound and composition. It comes at a time when her work is only just starting to gain wider acknowledgment in scholarly as well as popular circles.

This first volume, put together with the help of Goldsmiths and Daphne’s family, is the first in a planned series. You can preview it below.

4 thoughts on “Daphne Oram Gets New Release – On Vinyl”