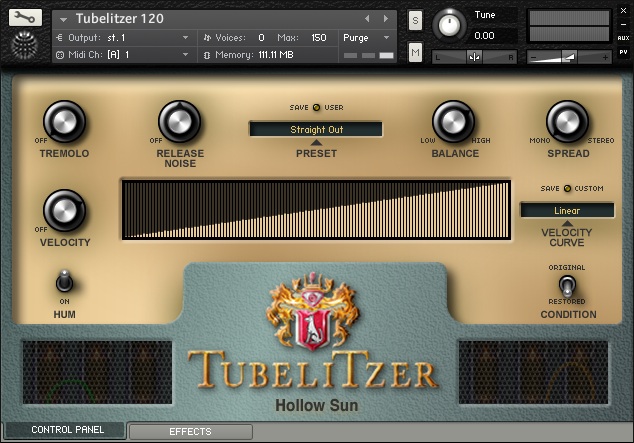 Here’s what they have to say about Tubelitzer:

The mechanical principles with Wurlitzer electric pianos are pretty much the same between models (and very similar to Rhodes pianos – a hammer striking a tuned ‘tine’ … and it is said that Harold Rhodes actually advised Wurlitzer’s deisgner/engineer, Ben Meissner, how to achieve stability with the tines) but the difference between the early models and the EP200A we are more familiar with is that up until the early 60s, the internal circuitry was tube/valve-based giving a mellower, warmer sound and doesn’t ‘bark’ as aggressively as the later models.

The 120 we have here is such a model. Each note has been painstakingly sampled chromatically by Hollow Sun friend, Christohopher Reis, who owns the orginal 120, with up to 27 velocity layers per note and release samples. A mammoth task on which Christopher has acquitted himself more than admirably. All samples are full length with no loops so you hear the actual sound of the original instrument ‘breathing’, warts, blemishes, grunts and all!

You can get details and an audio demo of Tubelitzer at the Hollow Sun site.