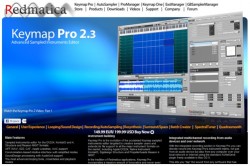 Apple hasn’t released an official announcement on the acquisition and probably won’t.

Apple rarely makes acquisitions, which raises the question: Why are they interested in Redmatica? Will they be bring better sampling tools to Logic Pro and GarageBand? Or will they just kill off Redmatica’s support for competing sampled instrument formats?