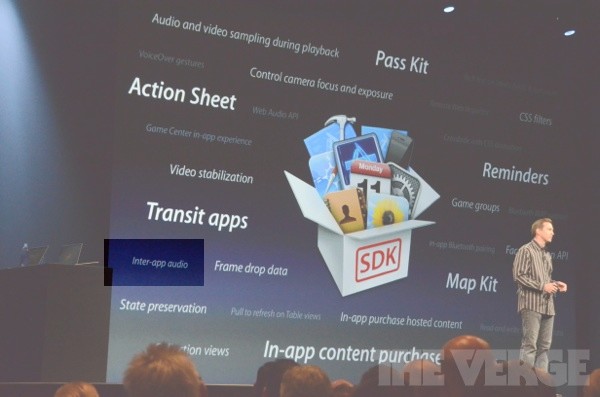 Apple made dozens of announcements at its World Wide Developers Conference today in  San Francisco – but most of them were anticipated updates and incremental improvements.

One announcement for iOS 6, Apple’s new mobile device operating system, perked up the ears of a lot of people interested in iPad and iPhone music applications – Inter-app audio.

Apple hasn’t publicly released details on Inter-app audio in iOS 6, but it looks like it may be adding the type of system level audio routing between audio and music apps that many developers have been waiting for. (Or, in the case of AudioBus, working on.)

Other items introduced without fanfare include system level support for audio and video sampling during playback and ‘multi-route audio.

If you’ve got additional details on iOS 6’s inter-app audio, leave a comment or let us know via the feedback form!

via The Verge, willkuhn, palmsounds