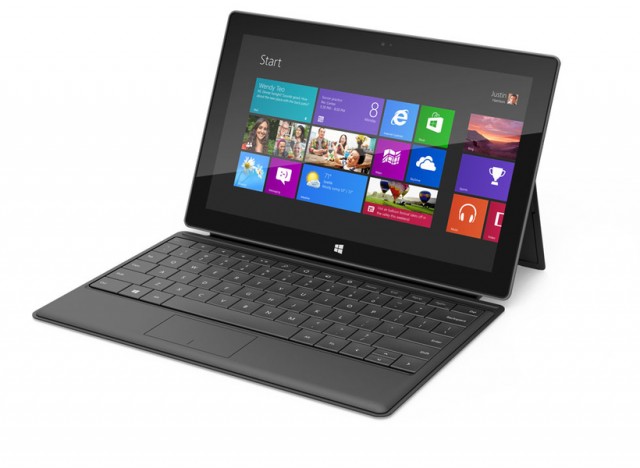 Microsoft today introduced Surface, their response to the Apple iPad and Android tablets.

And it looks like the world of tablets is going to get a lot more interesting, fast.

Microsoft positions Surface as ‘a new family of PCs for Windows’, very different than they way Apple has positioned the iPad as a ‘post-pc’ device. And Microsoft seems to be doing a good job of executing their vision, introducing a stylish tablet that nevertheless emphasizes the company’s Windows strengths.

Two models of Surface will be available:

Microsoft Surface looks like it could be a very interesting development in the world of tablet computers. Microsoft is taking a different approach than Apple, imagining tablets as ultra-lightweight PCs. This vision could be compelling for a lot of Windows users. And, if pricing is right, Surface could put the squeeze on Android tablets.

We’ll be very interested to see how Surface for Windows RT and Windows 8 Pro develops as a music platform. Check out the details and let us know what you think!

Conceived, designed and engineered entirely by Microsoft employees, and building on the company’s 30-year history manufacturing hardware, Surface represents a unique vision for the seamless expression of entertainment and creativity. Extensive investment in industrial design and real user experience includes the following highlights:

Software takes center stage: Surface sports a full-sized USB port and a 16:9 aspect ratio – the industry standard for HD. It has edges angled at 22 degrees, a natural position for the PC at rest or in active use, letting the hardware fade into the background and the software stand out.

VaporMg: The casing of Surface is created using a unique approach called VaporMg (pronounced Vapor-Mag), a combination of material selection and process to mold metal and deposit particles that creates a finish akin to a luxury watch. Starting with magnesium, parts can be molded as thin as .65 mm, thinner than the typical credit card, to create a product that is thin, light and rigid/strong.

Integrated Kickstand: The unique VaporMg approach also enables a built-in kickstand that lets you transition Surface from active use to passive consumption – watching a movie or even using the HD front- or rear-facing video cameras. The kickstand is there when needed, and disappears when not in use, with no extra weight or thickness.

Touch Cover: The 3 mm Touch Cover represents a step forward in human-computer interface. Using a unique pressure-sensitive technology, Touch Cover senses keystrokes as gestures, enabling you to touch type significantly faster than with an on-screen keyboard. It will be available in a selection of vibrant colors. Touch Cover clicks into Surface via a built-in magnetic connector, forming a natural spine like you find on a book, and works as a protective cover. You can also click in a 5 mm-thin Type Cover that adds moving keys for a more traditional typing feel.

Surface for Windows RT will release with the general availability of Windows 8, and the Windows 8 Pro model will be available about 90 days later. Both will be sold in the Microsoft Store locations in the U.S. and available through select online Microsoft Stores.

We say digital is cold, but that’s rubbish.

It’s simply more linear and reliable, and whether you like that or not is a question of taste.