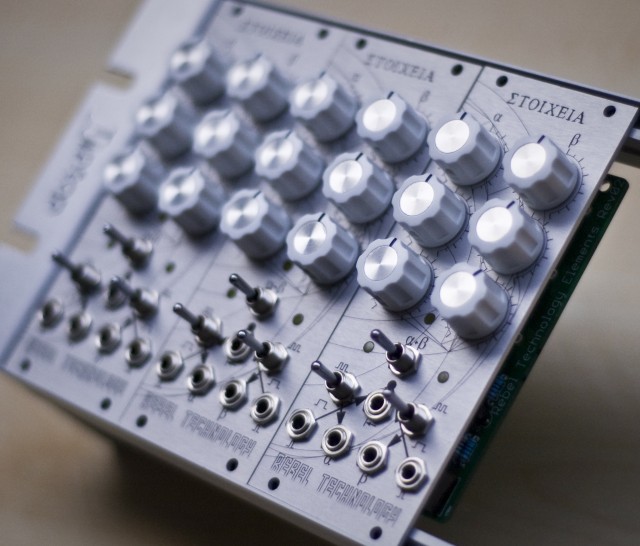 Stoicheia algorithmically generates rhythmic sequences from an input trigger signal. The name comes from the title of Euclid’s book Elements, in which the algorithm was first described.

If you’re not familiar with the idea of Euclidean sequences, Godfried Toussaint has published a paper (.pdf) that looks at how the Euclidean algorithm can be used to create sequences similar to traditional musical rhythms.

Stoicheia is driven by a micro controller which interfaces modular signal levels through discrete transistor networks. It functions by responding to incoming trigger signals using the MCU’s built in hardware interrupts. The step sequences are pre-calculated in the main processor loop and updated when the knobs are turned, which means that the interrupts can be processed very efficiently. This leads to a very low on/off latency.

Here’s a demo of the new sequencer in action:

Stoicheia is both an open source and open hardware design.  It’s available pre-built for £160. See the Rebel Tech site for details.

One thought on “Stoicheia – A Euclidean Sequencer For Eurorack Modular Synthesizers”

One good thing about music, when it hits you, you feel no pain.