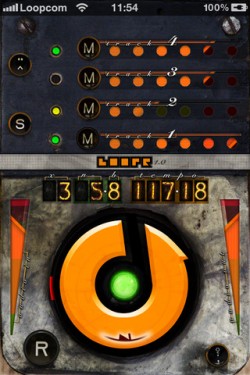 Loopr is a new multi-track audio looper for iOS.

With Loopr, you can create, practice, jam along, or sample audio soudscapes. It offers synchronization with drum machines and sequencers via its MIDI out sync feature, but also fast multi-layer recording via its ‘fast recording mode’.

Loops can be sent as independent files (including tempo and time signature information), which lets you share the groove with most desktop audio production apps (e.g. Logic Studio, Garage Band, …).

It’s also CoreMIDI and CoreAudio compatible, to use with the most popular iOS compatible interfaces.

Here’s a video demo of Loopr: