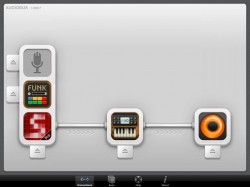 Audiobus – a new system for routing audio between audio applications on iOS – will launch on Monday, December 10th 2012. It will cost 9.99 US$ and will be available for the iPad, iPhone and iPod Touch on iOS 5.0 and later.

Several other apps are expected to be available shortly thereafter:

We’re expecting Thumbjam and Drumjam to be available shortly after launch since they’re currently waiting to be reviewed by Apple App Review.

Moog and Wavemachine Labs have been working on making Animoog and Auria, respectively, compatible with Audiobus but implementation is not yet complete for either of them.

Here’s a demo of AudioBus, showing one way it can be used:

If you’re not familiar with it yet, check out our interview with one of the Audiobus developers: What is Audiobus and how will it change mobile music making?

The developers also have announced plans for the next wave of AudioBus apps:

We’ll be starting a limited second wave of Audiobus apps – limited so we can rapidly respond to any potential remaining issues – by giving another 25 developers access to the SDK. These developers will be selected from the list of developers who have expressed interest in acquiring access to the SDK – currently that’s a list more than 700 entries strong.

After a sufficient amount of apps from the second wave of developers have been approved by App Review and feedback is favorable, we’re going to make the SDK public. This is going to happen in the next months.

For those asking themselves how long it takes a developer to implement Audiobus support into their app: It depends on the complexity of the app and level of integration. The fastest teams have done it in one day. Testing and submission to App Review is typically the most time-consuming part.

We’re currently finalizing the manual and we’re going to post videos demonstrating the less obvious features of Audiobus over the course of this week to shorten the wait.