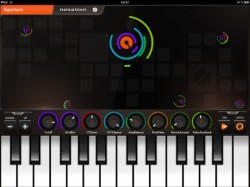 Novation has released Launchkey for the iPad – a ‘powerful and unique analogue modelling synthesiser’.

Novation doesn’t have much to say about Launchkey, other than it comes with 60 synth sounds and ‘gives you a fast and fun way to play with sound.

It’s a free download from the App Store – so check it out and let us know what you think of it!

Note: Launchkey is an iPad app and is not compatible with iPhone or iPod Touch. Launchkey requires iOS5 and above and is recommended for iPad 2, iPad Mini and Retina iPad.

42 thoughts on “Novation Launchkey For iPad Now Available For Free”