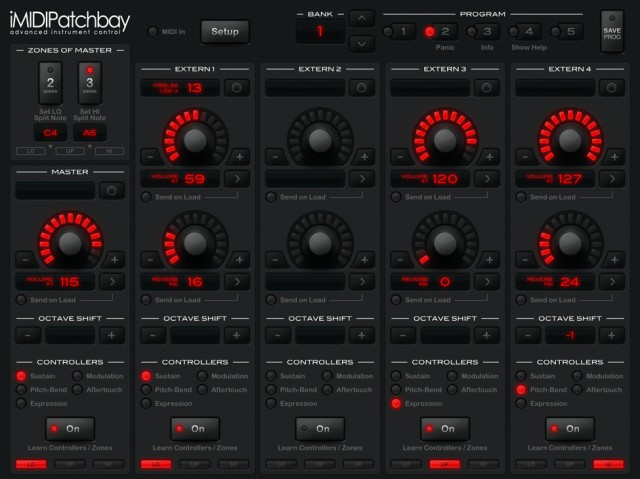 iMIDIPatchbay – a new iPad app that’s designed to let you organize your whole MIDI setup from one central point – is now available.

“iMIDIPatchbay aims to be used on stage. As I’m a live keyboardist myself and make frequent usage of the app, a great user experience and ease of use is taken care of. While some other apps also offer routing for MIDI data on iOS, none of them addresses the needs of live musicians. For example, iMIDIPatchbay allows to switch programs while still holding down keys without interrupting the sound. Furthermore, the user interface’s artwork fits nicely to real hardware devices.”

Here are some scenarios for how you can use iMIDIPatchbay.

As a keyboard player, you most probably know about splitting and layering sounds. While this can be done relatively easy on professional keyboards, it becomes more complex if your gear consists of multiple keyboards and sound expanders. iMIDIPatchbay makes building such configurations a lot easier than it has ever been before.

After connecting your keyboard and other MIDI devices to the iPad, you can easily create split zones and assign sounds of your MIDI devices to them. It’s also possible to route the MIDI data to other apps if they have a virtual MIDI port. Furthermore, you can filter out controllers which is great if you want e.g. pitch bend or sustain to affect only a subset of the active sounds.

You need a CoreMIDI interface to connect your keyboards and sound expanders to the iPad.

iMIDIPatchbay is available in a free and paid version. The paid version is $54.99 in the App Store. The free version is limited to two programs to store to, and they are cleared if the app is terminated. In addition, when running in the background, the lite version terminates after 30 minutes.