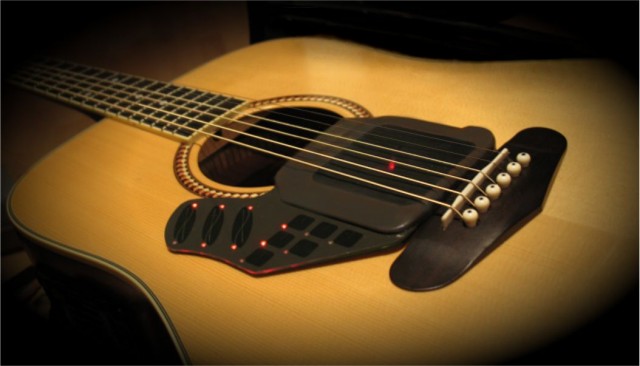 Paul Vo, the inventor of the technology behind the Moog Guitar and Moog Lap Steel instruments has for some years been experimenting with a new method of sound design: acoustic synthesis. Unlike traditional methods of analog and digital sound generation, acoustic synthesis creates new sounds and methods of musical expression by controlling the vibrations of actual physical objects.

Vo’s earlier designs were produced by Moog Music. With the first ‘acoustic synthesizer’, though, Vo is going a different route, funding production through a Kickstarter campaign.

Here’s an improvisation by Chris Stack with the Vo-96. Stack notes, “In this example, I explore some of the less extreme areas, just outside the normal acoustic guitar space.”

The Vo-96 system consists of two hardware elements, a powerful analog and digital signal processing (DSP) vibration control engine called the Core-96, and a transducer “pickup” with an attached user interface. Once installed you see only the transducer/interface, the rest is hidden safely inside the guitar.

The Vo-96’s operating software (firmware) at its current revision already defines an instrument that is powerful, deep, and great fun to play. Future firmware updates will be based on guitarists’ feedback. Customers who connect with us through this Kickstarter campaign will take part in defining the future of acoustic synthesis.

The Vo-96 hardware design is set, tested, very powerful, and will not change prior to the ship date. Hardware changes are a big reason why some crowd-funding projects end up shipping late. There are no plans to change the hardware in the future, but the Vo-96 behaviors and features will continue to evolve for some time to come.

More information is available at the Kickstarter site.