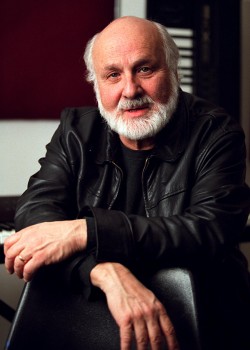 Electronic music pioneer Morton Subotnick is featured in a new NPR interview that looks at his early, influential electronic works, his current work and his role as an ‘edm pioneer’:

Morton Subotnick could fairly be called electronic music’s first hitmaker. His 1967 album Silver Apples of the Moon was an international sensation. Or, in his words, “It was like a bombshell.”

Silver Apples was the first piece of electronic music commissioned by a record label and was created on the first synthesizer small enough to sit on a table. Subotnick’s Greenwich Village workspace became a drop-in spot for musicians from The Mothers of Invention to The Grateful Dead to The Velvet Underground. One night, unfamiliar visitors arrived.

“Some [club owners] came in and said, ‘We just bought the name Electric Circus. We don’t know exactly what it is, but we were told if anyone knows, you would know.’ So I gave them a demonstration of an electric circus. They made me the director,” Subotnick says.

As that Manhattan nightclub’s artistic director, Subotnick gave birth to electronic dance music. He says opening night at the Electric Circus was a big event.

“[Japanese conductor] Seiji Ozawa came down; members of the Kennedy family were there,” Subotnick says. “I played about a half-hour’s worth of material starting with a heartbeat. … It wasn’t a beat that you would usually use in rock ‘n’ roll, but it was a strong pulse, and that’s all they needed. And they ended up dancing to it.”

You can listen to the interview via the embed below or at the NPR site: