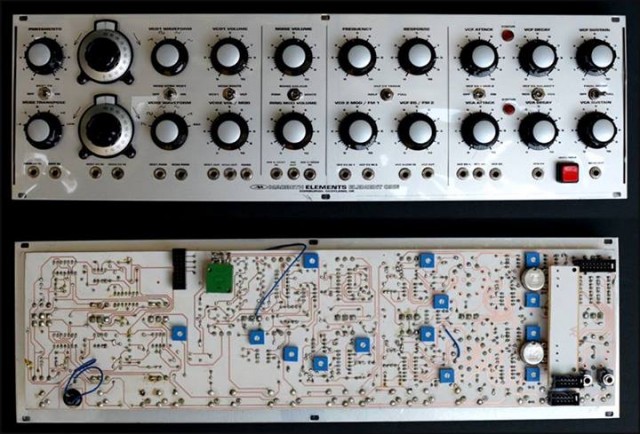 Ken MacBeth of MacBeth Studio Systems has shared some images of his prototype for a new Eurorack monster module – the Element 1. It is the first of a set of five planned 3U Eurorack-sized 84HP synthesizer modules.

According to MacBeth, the sound of Elements 1 is “a sum of parts -‘Spike’ Oscs meet Acidic Filter which goes through a classic VCA.” It’s inspired by the look of classic British synths and the sounds of classic Japanese synths:

Here’s what MacBeth has to say about it:

Please see other pics!…..and yes, there is a Fifth Element!

VCO2 has 6 Waveforms- Saw/Square/Tri/Sin/Ramp/S&H- both Square waves can be externally PWM’d. The Oscillators are close to the Dual Osc- I call them ‘Spike’ Osc’s because the play on the Glitch, common to Saw root Oscs.

There are convienient Trimmers on the rear to allow some or more of this Glitch to appear on waveforms such as Triangle or Sine adding harmonics in the sound if required. It suits the mild distortion of the diode ladder filter a treat!

84 HP might seem large to Eurorackers, but given the ‘normal’ size of the control knobs- and the Verniers- it makes for a perfect, busy, but non-cluttered layout. In Elements 1- you have the good, basic elements to get going- VC LFOs will turn up in other Elements- so wait and see!

Here’s an informal demo from MacBeth of the Elements One:

The MacBeth Element 1 is still under development, so pricing and availability info are to come.