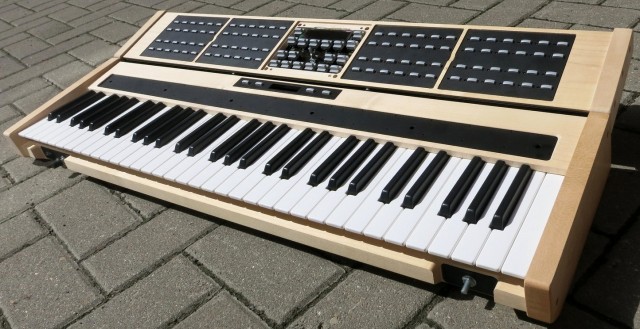 The Emphase Synthesizer is a new synth, currently in development at Non-Linear Labs, a startup founded by Stephan Schmitt (Native Instruments, Reaktor).

The Emphase is a digital synthesizer design, consisting of a high-resolution controller keyboard driving an advanced digital audio engine. The audio engine is based on Native Instruments Reaktor.

The Emphase Synthesizer is designed as two independent units: the performance cabinet and the creation cabinet:

The Emphase Synthesizer is designed with these concepts in mind:

Control. Typically, most synthesizers combine the actual audio engine with a (sometimes large) number of modulation sources which are programmed in advance. Although some knob-twisting is possible, the modulation sources, amounts and routings are usually set up before performance and saved as part of a preset.
This often reduces the performing musician to a ‘triggering unit’ who just pushes a key to trigger a series of pre-determined events, shifting the weight of musical responsibility to the sound programmer.

Nonlinear Labs uses a different approach. All control aspects are literally in the musician’s hands (and feet!) with extremely sensitive – and expressive – keyboard controller units that drive the synthesis engine in real time.

Expression. The key to a highly musical real-time control of sound is our new TCD protocol. TCD replaces the dated MIDI protocol with a high-resolution and multi-parameter system of messages consisting of a continuous stream of parameter changes.

Actually, this concept answers an age-old need; composers over the centuries have often said that music really happens ‘between the notes’. Protocols like MIDI cannot capture all the necessary musical information for expressive between-the-note performance. With TCD, musicians are given real-time control over the widest range of sound expression.

Hardware and Software. No external computer is required. The TCD messages sent by the keyboard controller system are generated by an advanced ARM microcontroller architecture. An embedded computer handles the digital sound synthesis.

Every parameter can be directly selected with hardware controls. In other words, our instruments are software-defined but have a dedicated haptic interface. If an optional touch screen is desired, a wide range of (Wi-Fi connectable) devices will provide a graphical user interface.

The Emphase Synthesizer is in development. Pricing and release date are to be announced. You can follow development of the new synthesizer at the Non-Linear blog.

27 thoughts on “The Emphase Synthesizer (Sneak Preview) Looks Beyond MIDI”