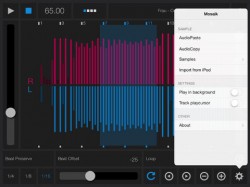 Here’s what Endeavour has to say about Mosaik:

You can import samples into Mosaik using AudioPaste, iTunes file sharing or the devices iPod library. To extract beat information out of the imported audio and to align it onto a global pattern, the App is using a beat detection algorithm which starts right after you have imported a sample or song. With this been done, you can warp through your audio, change its playing speed and set loops.

The time-stretching algorithm and how it works is the special feature in here. Instead of using an existing library we took a different approach. Our engine is taking care of beats. This means that Mosaik is trying to preserve the attack and decay phases of your audio. We call that “BSOLA” which means: “Beat Synchronous Overlap Add”.

Mosaik is still in the early stages of development, so Endeavour is releasing it with drastically reduced introductory pricing, which will remain in place until the next major update. But they are describing Mosaik as “Ableton Live on your Sofa”.

Plans for the next update include AudioBus support, real-time audio recording, user-definable warp-markers and more.

Mosaik is available in the App Store.