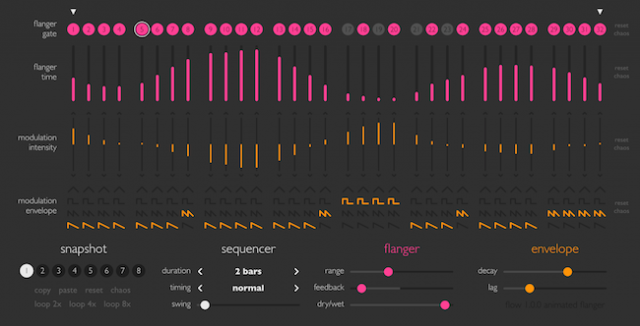 Sinevibes has introduced Flow – a flanger that’s designed to create effects that go far beyond tradtitional up and down ‘swoosh’ effects.

Flow uses a sophisticated envelope sequencer to modulate the sound in a rhythmical fashion. Flow has two different flanger characters, with positive or negative feedback, advanced synchronization and timing features, plus a host of automation and randomization options.

This allows you to create a myriad of unique effects: from intricate “jet plane” patterns and dancing comb filtering to complex swooshes or stuttered glitches. In addition, each instance of Flow stores eight snapshots of itself that can be switched in realtime or via automation.