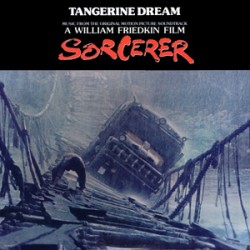 Tangerine Dream has been hugely influential in the world of film soundtracks, and, more recently, in the world of video game soundtracks. The group has scored over 50 films, including indie films, ‘b’ movies and mainstream Hollywood films.

While it was not their first soundtrack, their score for the 1977 William Friedkin flim, Sorceror, kicked off a 15-year period of intense soundtrack work.

The film was a bomb when it was released. It followed Friedkin’s critically acclaimed and wildly successful The Exorcist. Viewers may have expected another supernatural-themed story, based on the film’s title, or may have been put off by the film’s non-English sections.

Since then, though, Sorcerer has gained respect as an intense, existential thriller – and Tangerine Dream’s music has become one of their most well-respected soundtracks.

The music of Sorceror is episodic. Most of the tracks are 2-3 minutes long – very brief, compared the band’s epic album side-long jams of the time period. Many of them have fade-ins/fade-outs, which make them seem like excerpts from longer works.

What makes the soundtrack stand out is that it features the sound of Tangerine Dream at the height of what is, for many, their most popular incarnation – the Edgar Froese, Christopher Franke and Peter Baumann lineup. This is the lineup responsible for fan favorites Phaedra, Rubycon, Ricochet & Stratosfear.

And the Sorceror soundtrack catches the band at an interesting time, technically.

They had a collection of some of the most advanced synthesizers and sequencers in the world, but were also still making heavy use of Mellotrons, electronic keyboard technology from a previous generation. The score blends the clear, precise sequences of their giant Moog and Projekt Elektronik modular synthesizers, with the more murky, ‘second-generation’ sound of Mellotron tapes. As a result, it’s electronic, but also very organic.

By the time of their Thief soundtrack (1981), their sound had changed significantly, with more polysynth pads and a greater emphasis on layered synthesized sequences.

For fans of electronic scores, and especially fans of TD’s early lineup, the Sorceror soundtrack is a must-have.

You can preview the Sorceror soundtrack below. It’s available via Amazon, iTunes and other sources.