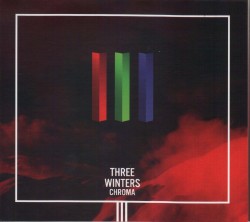 According to the band, Three Winters – made up of Kim Sølve, Anders B. & Lars Fredrik Frøislie – takes inspiration from the vintage sounds on the ‘fifth generation VHS movies’ that defined their generation.

The 11 tracks on Chroma sound like a soundtrack from a lost 80’s sci-fi or horror film. They features the classic sounds of driving analog sequences, deep synth bass, Mellotron, electric guitar and vocoders.

The tracks – with titles like Atrocities, At The Center Of Dystopia & Amnesia – tap into memories of low-budget luridness, cyborgs and slashers. If you’re familiar with the soundtracks of Tangerine Dream, Goblin and  John Carpenter, you’ll know where Three Winters gets some of their inspiration.

Three Winters’ Chroma is available now via Amazon, iTunes and the label site.