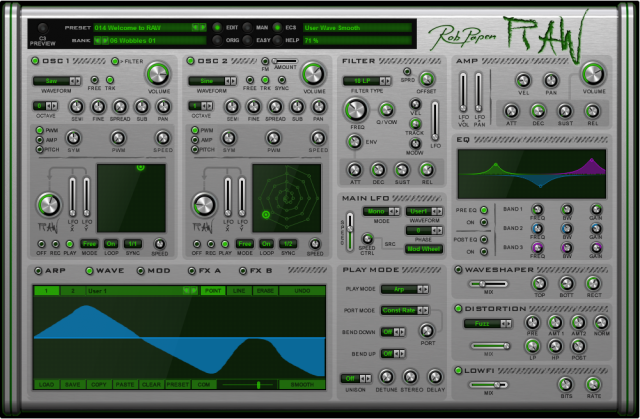 “RAW has a focus on ‘distorted’ sounds, so this means that it has a different signal setup, synthesizer-wise,,” notes Papen. “We have two oscillators and a FILTER, but what is new when compared to our other synthesizers is that you have an EQ that can be pre- or post-distortion. After that, there is also a WAVESHAPER and dedicated DISTORTION module with several types of distortion, as well as a LOW FI control. This is new to this synthesizer, and it’s part of the concept that the distortions are on the voice level, so it’s not just a case of a total signal going into the distortions, but rather each voice has its own WAVESHAPER, DISTORTION, and LOW FI — plenty of options to shape the sound here!”

Here’s what Papen has to say about RAW:

RAW has two oscillators, each with an X/Y field, (as included in Blade and BLUEII) to distort the waveform using Phase Distortion. You can also draw two of your own ‘waveforms’ and use them as LFO waveforms enabling the creation of unique ‘wobble’ movements that are perfect for for DubStep and other electronic music styles.

RAW has all the great Rob Papen filters to shape your sound further, but in a refreshing twist, ‘EQ’, ‘Waveshaper’, ‘Distortion’ and ‘LoFi’ have also been added on a voice synthesis level. Other FX such as Chorus, Phaser, Flanger, Stereo delay and the amazing HQ Reverb of Rob Papen can all be added to your sound and of course, the cool Arpeggiator/Sequencer, Easypage and preset bank manager have all been included as standard.

If you’ve used RAW, share your thoughts on it in the comments!