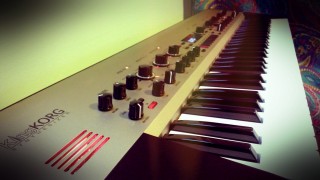 So we were interested when he shared a new track, embedded below, that features the Korg KingKorg synthesizer. It’s an interesting exploration of the KingKorg. But, more importantly, it’s a great example of going beyond the presets and making a synth your own:

Here’s what he has to say about the track:

This track was made using only the KingKorg synthesizer. Two of the patches make use of combinations of inharmonic DWGS waves and X-mod/ring mod waves respectively. Various wave combinations were made on the fly during recording, as were LFO amounts and effect settings. This synthesizer shines at real time control.

Mitchell also shares his thoughts on the KingKorg at his site.

6 thoughts on “Mid-Century Electronica On The KingKorg Synthesizer”

Berra’s Law – In theory, there’s no difference between theory and practice, but in practice, there is.