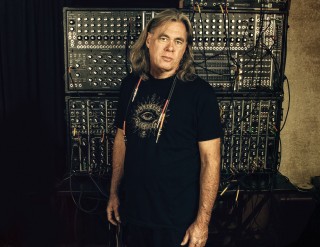 Synthesist Steve Roach is featured in the latest episode of the Echoes podcast.

Host John Diliberto talks with Roach about his new album, Skeleton Keys, which is an exploration of sequencers and large-format analog synthesizers.

“The entire album and all the interlocking parts are all created from the way you carve out these patterns, and sequences and rhythms, with hands on,” noites Roach, “So it really does have this feeling of shaping it, you know, like you’re carving something out using both hands on a large variety of knobs, on filters, envelopes and the essentials, of the components that make up the analog modular, the way I designed it for this style of music.”

“Some of the sequencers are still designed off the early Moog sequencer that was used by Klaus and Tangerine Dream,” adds Roach. “So that would be like a guitarist getting hold of an early Strat or a Gibson SG or something, and having been inspired by guitarists that used that. There’s a certain thing that just happens when you put your hands on those instruments.”

You can listen to the interview below or at the Echoes site.

Skeleton Keys is available at Amazon, iTunes and other retailers.