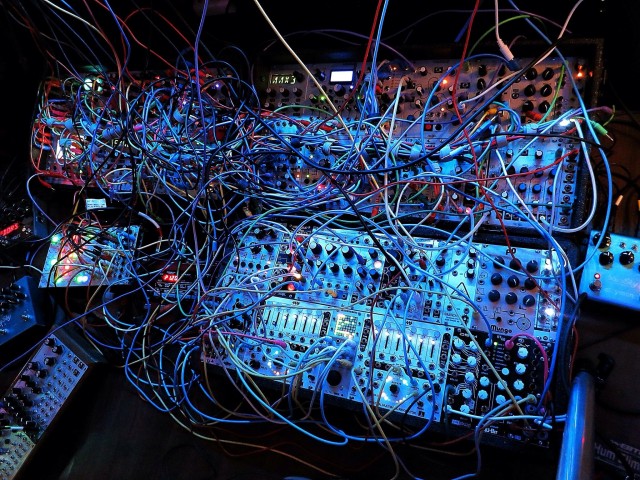 Here’s what devine has to say about the technical details:

The master clock is the Tiptop Circadian Rhythms. Clock output running into the Modcan Touch Sequencer. Channel output one running into one intellijel Dixie (V1) for the bassline. Dixie output running into a Mutable instruments Ripples filter (LP4), triangle waveform. Second channel output sequencing quantized 8 note sequence to the telharmonic oscillator, creating the first lead sequence in the patch (major scale set). One Mult output taken and sent to the Strymon BigSky reverb pedal to create the delicate swarm pads that rise in and out at the builds. Amplitude control of the slow rises via the intellijel HexVCA, slow rate control from one Modcan Quad LFO. The other output is then taken and sent to the Qu-bit RT-60 reverb. Third output from the Modcan TS sending quantized CV to the MakeNoise STO oscillator variable SHAPE output then sent through lower section of the MakeNoise Optomix. The forth output from the Modcan TS is sending a 4 chord pattern (min9) to the intellijel shapeshifter module in chord mode. This output is then sent to another Qu-Bit RT-60 reverb algorithm.

MakeNoise Mysteron plucking guitar like effect being triggered by a 4ms RCD, 5th trigger out. The Mysterson then is running out into a Strymon BlueSky pedal, reverb.

Drum sequencing from TipTop CR, channel one kick drum going to the Nord Drum 2. Second channel number 2 triggering a custom snare drum made on the Nord Drum 2. Channel 6 from the CR triggering a low bass drum, in the key of “C”. Clock output from CR into the 4ms SCM being rotated by a intellijel dixie sine wave output running at a slow rate shifting the 16th’s hi hat pattern. Noise source for hi-hats are the SSF quantum rainbow 2, purple output running into the MakeNoise Optomix. The high end snare clap sound is by the Synthrotek’s DS-M drum module, then being lightly processed by the Synthrotek DLY, slowly CV controlled by a Modcan Quad LFO in random mode creating more glitchy effects. This is then being sequenced by channel number 2 from the tiptop CR. The first lower left side 4ms Spectral Multi-band Resonator processing 72 custom DSP samples, which are being played by one addac wave player.

The output is then being sent to a intellijel uVCF filter (hi pass), for the light subtle glitch textures. The second 4ms Spectral Multi-band Resonator, processing another set of 32 samples (noise washes/slow rises/falls) via channel number 4 from the CR tiptop. From here the output is being processed by a Mutable Instruments Clouds (granular mode), being controlled by the Pittsburgh Modular Game System running “Meteor Shower” mode in which the explosion based gates and random control voltages are then being sent to 3rd Dixie, controlling the CV rate time then from there its sent to the “Freeze” input on clouds, processing small bits of audio coming from the second addac waveplayer, The second output coming from the gamesystem is going into the “position” input on Clouds, which is doing some additional glitching to the signal.Main output from a intellijel Mutagen mixer then ran through the Eventide space pedal for extra spatial atmosphere. 🙂

Devine has made the track available as a free download.