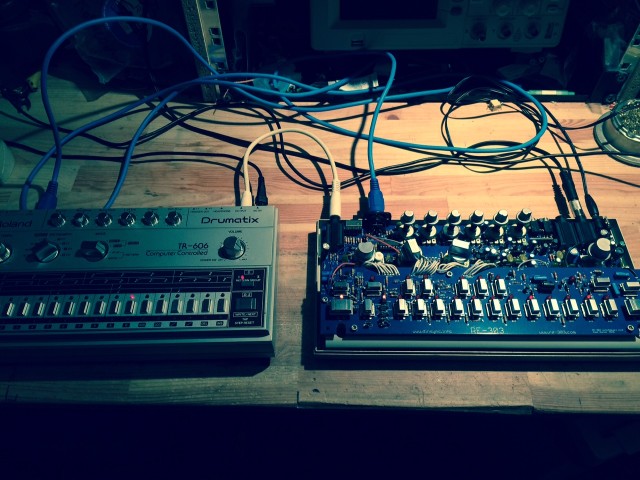 There have been dozens of takes on a modernized 303 and 303 clones. These are typically adapted for efficient modern production and widely available modern parts.

The RE-303, on the other hand, is designed to replicate the original 303 accurately enough that you should be able to use the new boards as replacements for the originals. 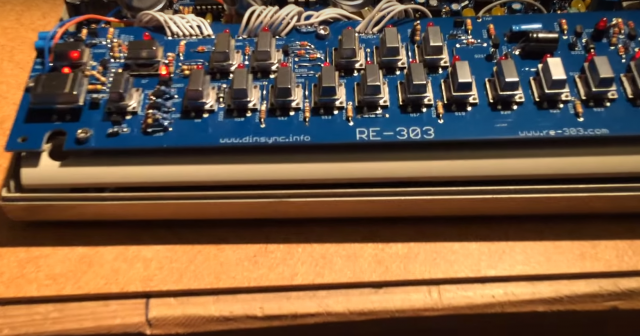 As you can see from the intro video, there is already a working prototype of the RE-303.

The project is currently planned to be a hardcore DIY project, rather than a pre-packaged kit. According to DIN Sync, most parts are readily available, but either a real 303 CPU or Quicksilver CPU will be required for the sequencer.

Q: Why do we need yet another 303 knockoff?
A: There have been many clones, I honestly wanted to make a genuine replica. Now the dead TB-303’s with broken motherboards can come back to life and new TB-303s can be born.

Q: Hasn’t this been done already?
A: Actually no, not in the purest form. We’ve had the x0xb0x which sounded very close but didn’t look the part. We’ve had the TT-303 which looks that part but is not a genuine replica of the original hardware. The RE-303 circuit boards have been made by dissecting a mint condition pristine TB-303 and manually recreating the board in CAD from the hardware rather than the service schematics. Every nuance and mistake in the hardware not in the service notes is recreated in the RE-303. It really is for all intents and purposes a TB-303.

Q: When can I get one?
A: As soon as they are ready, just post on the waiting list thread. By the nature of this project It’s likely to be limited, so first come first served.

Q: What about kits?
A: This is likely to never happen sorry, this project is probably going to be the most hardcore DIY many have tried. But it will be worth the effort!

Q: What about rare parts, the VCA and CPU, memory chips, switches pots etc etc.
A: There currently exists many solutions for these today and I’m actively working on some as part of the project.

Q: How long will this all take?
A: How long is a piece of string?

Details on pricing and availability are to come. You can follow the RE-303 development at the project site.