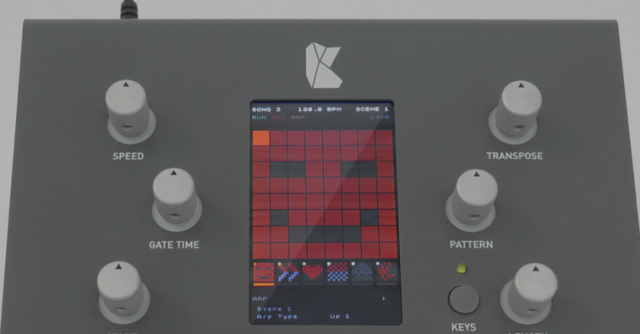 Kilpatrick Audio – creator of the Phenol synthesizer – has launched a crowdfunding campaign to produce the new Carbon Sequencer and Performance System.

Here’s the official promo for the campaign:

Carbon is primarily designed as a pattern-based sequencer. It has six tracks which can each hold 64 steps. Steps can be generated randomly, edited interactively, recorded from a MIDI keyboard one step at a time or in realtime while the sequencer is running.

Polyphony and CC recording is supported so each step can contain chords or other performance data.

The real power of Carbon is how variations of sequences can be made. By turning the Pattern control, different steps in the sequence can be enabled and disabled.

Adding in the concept of scenes lets you quickly switch between different parts of a song or different variations. Scenes can store the range of steps to play, the pattern, track mute state and a number of other parameters.

All the recording and editing can be done in real-time without ever stopping the sequencer.

Carbon is also a performance switching system, allowing you to easily send your keyboard signal to MIDI and analog instruments. Two built-in MIDI outputs enable separate routing of clock and channel signals from each track. The analog section supports four CV/gate outputs plus reset and clock signals. Both monophonic and duo/polyphonic output types are supported. You can even send to multiple MIDI and analog instruments at the same time.

Here are a set of demo videos for the Carbon sequencer:

The Carbon is priced at US $699, with ‘early-bird’ backer pricing starting at $589. See the Kilpatrick Audio site for details.