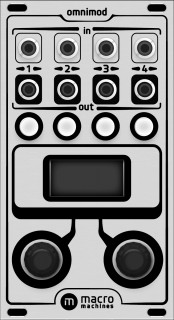 Centered around a high contrast OLED screen, the Omnimod provides vivid visual feedback for precise editing, as well as a scope mode to aid in configuring the inputs. This allows for deep control over complex modulation sequencing.

You can save settings as presets, and you can also use the Macro Machines Storage Strip to allow multiple modules on the same power bus line to store and recall their settings at the same time. This allows for instantaneous system-wide storage and recall of different configurations.

Macro Machines first product, the Storage Strip realizes an entirely new method for complete patch storage and recall using the standard Eurorack power bus board. When used in tandem with their second product, the Dynamic Destiny dual 4 to 1 switch router, entirely different patch cable routings can be saved and sequenced. You can, for example, create one setting with a deep analogue sub oscillator routed through a lowpass filter, and instantly switch this to be a complex high pitch FM oscillator through a spring reverb. This gives owners a new possibility to refine and explore vastly different sounds and come back to them in an instant.

Adding the Macro Machines Omnimod to the Storage Strip and Dynamic Destiny, the user could design an entire group of different settings using any modules they currently have, and come back to them, refine, record different takes, perform and jam with quickly accessible, reliable start points.

The Omnimod is priced at US $385. See the Macro Machines site for more info.