In this video, they demonstrate what happens when you put together two of their instruments – designed 40 years apart. 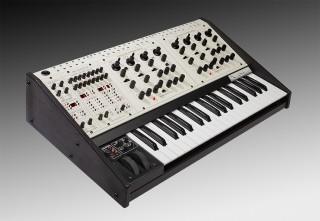 Tom Oberheim’s Two Voice synthesizer was originally release 40 years ago, in 1975. Oberheim calls it his favorite synth design, and earlier this year he debuted an updated version.

Roger Linn’s LinnStrument is a new MIDI controller design that supports three dimensions of polyphonic performance control. It can sense the movement of each of your fingers in three directions. For example:

This flexible range of performance control has been rare in electronic music controllers. It is becoming accessible to a broader range of musicians, though, because of the availability of instruments like the LinnStrument, the Roli Rise, the Haken Continuum and others.