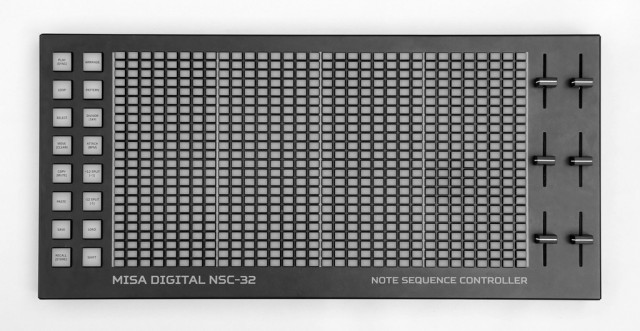 The Misa Digital NSC-32 is a MIDI controller and makes no sound of its own. It can play up to six sequences (patterns) simultaneously.

Note sequences are visually displayed on the note grid and can be modified by pressing the cells on the note grid. The individual notes are represented as blue illuminated cells. Notes can be selected, copied, moved and pasted using the control functions.

Sequences can be played (cued) and stopped in sync with the master clock.

Sequences can be stored in permanent storage for later use. The NSC-32 can store up to 768 sequences. Each cell on the note grid behaves as a save location. This means you can visually group different sets of presets on the grid based on category.

Here’s a demo of the NCS-32’s basic functions: