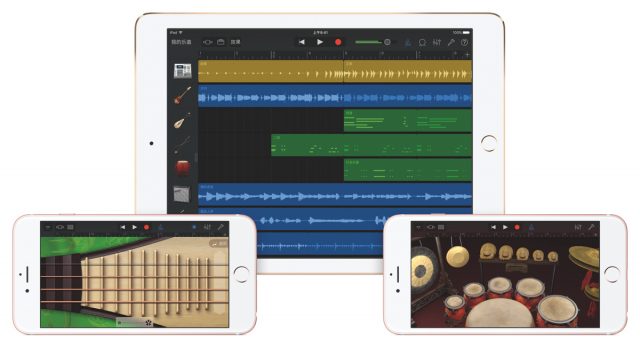 Apple today announced an update to GarageBand, targeting the huge Chinese market with new instruments, sounds and loop content inspired by the music history of China.

The pipa, erhu and Chinese percussion instruments in GarageBand can be played on iPhone or iPad using Multi-Touch, and on Mac through the built-in Musical Typing feature or by connecting a third-party USB music keyboard.

Each instrument includes different playing articulations, including rapid picking and note bend for pipa, and trill, grace note and glissando for erhu, making it incredibly easy for a novice to create a realistic and expressive performance.

iPhone users can also use 3D Touch with the erhu and pipa to dynamically control vibrato and intensity, and both the pipa and erhu include Autoplay, letting users tap on any chord and get a complete, rich performance. Users can also play a collection of Chinese percussion instruments including drums, wood blocks, cymbals and gongs.

This update adds 300 Apple-created loops from a variety of instruments and styles, including guzheng, dizi, yangqin and Peking Opera, to the library of Chinese musical content in the app. These loops can be mixed and matched with Chinese instruments in GarageBand to create traditional music or entirely new styles.

GarageBand for iOS also supports Live Loops, a way to create music by tapping cells and columns in a visual grid to trigger looped instruments and samples. Live Loops in this update adds two new Chinese Live Loops grid templates, one traditional and one modern, showcasing a variety of Chinese instruments and percussion.

Chinese localization is also significantly enhanced across the entire app, with all sounds, loops and instruments now translated to Simplified Chinese or Traditional Chinese.