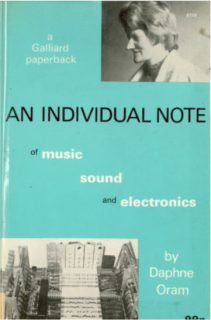 The Daphne Oram Trust has launched a Kickstarter project to fund a new printing of electronic music pioneer Daphne Oram’s 1972 book on ‘music sound and electronics’, An Individual Note.

The book offers a look at the technology and ideas behind creating electronic music, from the perspective of a mid-century electronica pioneer.

“We will be entering a strange world where composers will be mingling with capacitors, computers will be controlling crotchets and, maybe, memory, music and magnetism will lead us towards metaphysics,” she writes at the start of the book.

Daphne Oram (1925-2003) was the first Director of the BBC Radiophonic Workshop, which she co-founded in 1958. She also created a personal approach to sound synthesis, Oramics, that allowed her to score and directly control the parameters of synthesized sound. 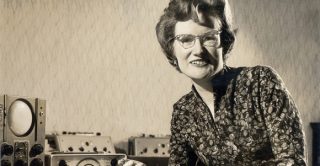 The Oram Trust hopes to raise £10,000 via fund the new printing of the book. The money raised will allow them to pay for:

The new printing of An Individual Note is available to project backers for £20, about US $29.