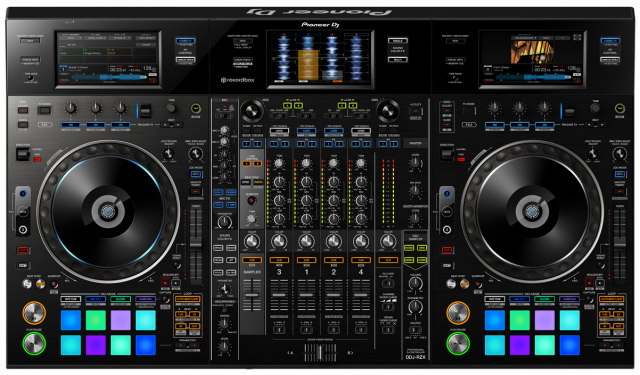 Pioneer DJ has announced the DDJ-RZX, a combination DJ/VJ controller, designed to make the most of the new rekordbox video Plus Pack for rekordbox dj.

The DDJ-RZX is a 4-channel professional controller for DJs and anyone who wants to bring videos into their performances.

It also inherits traits from the CDJ-2000NXS2 multiplayer and DJM mixer series, including large jog wheels and high-quality sound.

The rekordbox video Plus Pack for rekordbox dj lets you manage video and image files in rekordbox, then play and mix them live on any of the controllers in the DDJ range as if they were audio tracks. Use the crossfader to mix two video sources with a choice of 20 Transition FX. Touch FX lets you add FX and adjust parameters by tracing on the x and y axes on the display.

Pioneer says that the DDJ-RZX is designed to give dependable video performance, even when using high definition video files. You can also add text and create slideshows on the fly, and Camera FX lets you show the live feed from a digital camera connected to your computer.

The DDJ-RZX is expected to be available in July, 2016, priced at US $2,999.rekordbox video is available via the rekordbox site.