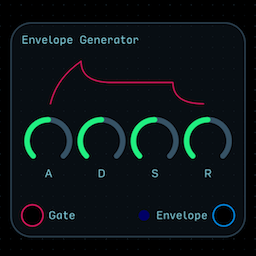 Audulus’ audio engine has been overhauled to allow for larger and more complex patches. According to the developers, this means that you can now use analog-modeling filters without dragging down the performance of the rest of your patch.

Audulus 3.3’s module library has also been revamped. Many new modules, tutorials, and examples are included, featuring a new standardized signal flow. Inputs and outputs are all clearly labeled and indicate what type of signals are expected or produced.

The iOS version of Audulus 3.3 also has some significant user interface changes.

Now you can organize and search for your creations by tags, or use the search bar to find a particular patch. Part of this UI overhaul includes removing the module browser toolbar.  Now you just simply tap on the background and press “Create,” and the module browser appears on screen.