The Surface Studio can be used as a traditional workstation or as giant touchscreen desktop. It features a high-resolution 28-inch 4.5K screen that is designed to work with pen, touch and Surface Dial — a tangible dial controller. 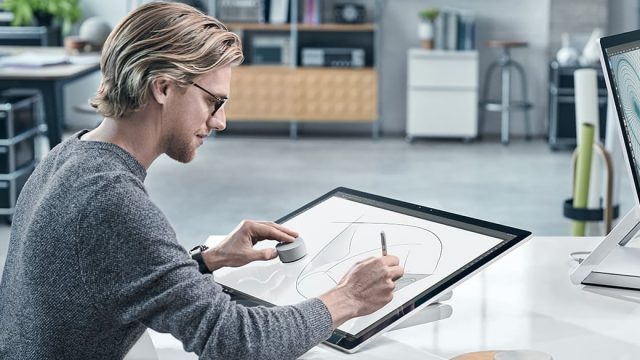 In addition to the Surface Studio, Microsoft introduced the Surface Dial – a tangible knob controller that can be used to: adjust volume or other settings; make tool selections; and as a navigational tool.

When you place the Dial directly on the screen, it brings up a set of digital tools specific to the app that is open.

For example, with Surface Dial, artists can change the color or the size of their brush tip as they paint without ever moving the pen away from the screen. The combination of Dial, pen and touch controls are designed to let you work in a more immediate and tactile way.

Surface Dial will be available for US $99, starting Nov. 10.

With the Surface Studio and Surface Dial, Microsoft is creating a new computing form-factor that’s tailored to creative computing tasks. It remains to be seen whether the new capabilities are supported by music and audio app developers – but it’s not hard to imagine ways these tools could be used in music production.

What do you think of Microsoft’s new Surface Studio and Surface Dial? Share your thoughts in the comments!