The event offered a unique opportunity to see some masters of electronic music; to learn from experts in things like visualization, synth design, mixing and production; to get insight into the live rig choices of some leading electronic musicians; to interact with a variety of electronic installations; and to see some amazing performances.

Synthtopia was on site in Berlin for the event. Here are some of our impressions and images from Ableton Loop 2016. 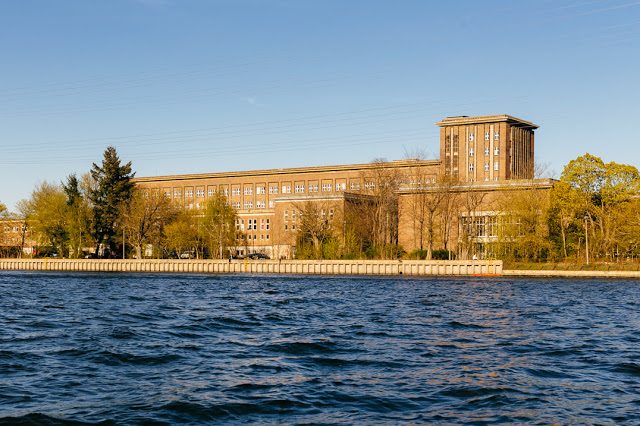 About Berlin & The Funkhaus

Berlin is a unique city and has a unique role in the world of electronic music.

The city’s history is reflected in its architecture and its neighborhoods. You can still see the effects of WWII, a divided Germany and the GDR era. And, as you move through the city, the texture of each area reflects that area’s unique history.

Navigating Berlin is easy. The city’s network of subways, trains, trams and buses is extensive, efficient and makes it easy to get just about anywhere in the city. A week pass costs about $30. And public transportation is integrated with mobile mapping applications, so it’s easy to figure out how to get where you want to go.

Berlin is also a relatively inexpensive city for travelers. Good hotel rooms are readily available for well under US $100/night and there are lots of inexpensive food options.

Berlin is also easy to navigate for English speakers who do not have German language skills. Germans study English in school from an early age, so you’ll generally meet people that speak English very well. Many larger German companies are international, have staff from around the world and are run in English. We rarely ran into communication problems. 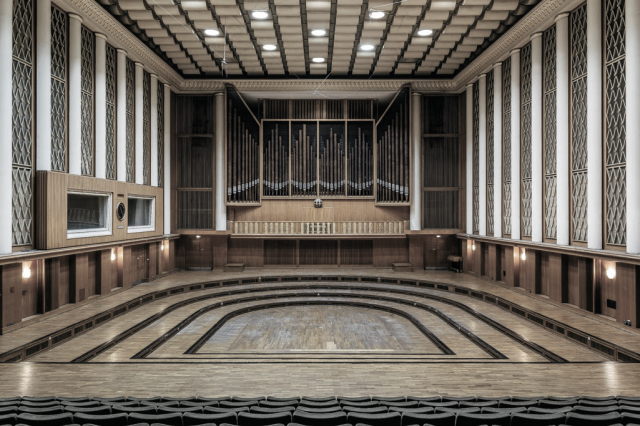 Loop was held at the Funkhaus – a massive facility, built in 1951, that was formerly the home of East Germany’s national radio.

It’s said to be the largest broadcasting facility in the world and features studios large enough to record orchestras. There are also numerous smaller recording studios and offices and infrastructure to support the thousands of people that worked there. 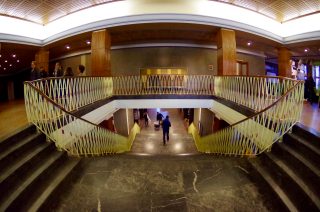 Throughout the Funkhaus, you see fascinating architecture, luxurious materials and amazing attention to detail. The result is that there are interesting acoustic spaces throughout the entire building.

With German reunification in 1990, the Funkhaus became redundant, and the facility was under-utilized for decades. In more recent years, though, developers have started to renovate the facility, keeping it alive as a recording facility and turning it into an event venue.

Because of its unusual history, the Funkhaus is a fascinating location for events like Loop and Superbooth, but it comes with some quirks.

The building has not had a comprehensive renovation or restoration to bring it to modern standards. So, along with the facility’s historic glory comes some weirdness – like poor lighting around the building at night and some ‘historic’ heating infrastructure. 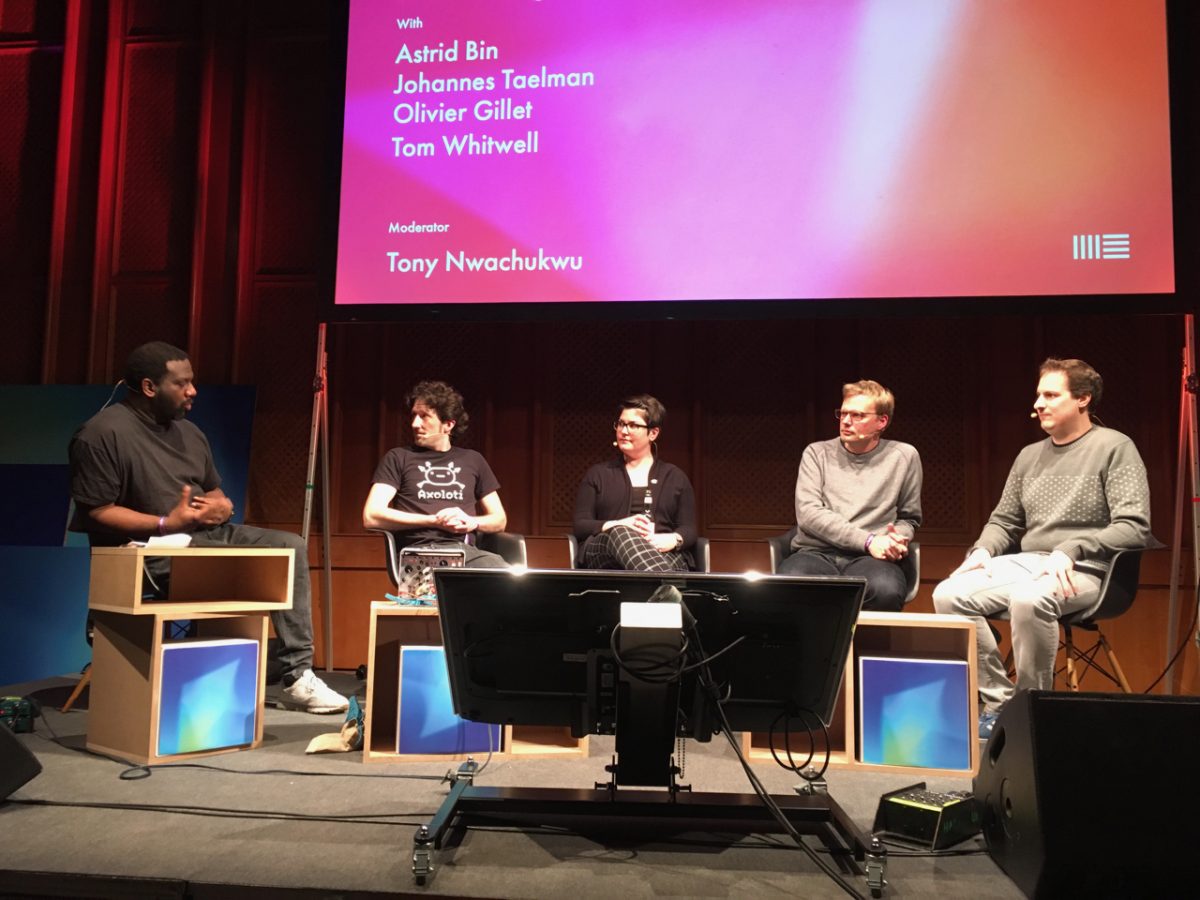 For people that have never attended Loop, the idea of traveling to another country to attend a conference might seem daunting. Those sort of fears are unfounded.

Loop is an international event, run in English, from the signage to the handouts and the sessions. Getting to Loop and getting around at Loop was actually easier than some of the US events we’ve attended.

You might also expect an event put on by Ableton would be all about Ableton and Ableton Live. We’ve been to a lot of events sponsored by technology and music technology companies, and they generally can’t avoid using their events as an opportunity to sell you on their products.

At Loop, we saw nothing like this. There was no keynote to introduce Live x.x, no talks about Ableton’s roadmap, no seminars showcasing how great Live is or anything of that sort.

Instead, it felt like the organizers were tasked with putting together the type of event that they – and people that use Ableton’s tools – would like to attend.

As a result, there was no assumption made that attendees knew Live, and you could have a complete experience at Loop, even if you’ve never used Live. While most of the sessions featured Live users, the focus was on what people are doing – the music they are making, how they approach their tools and the new technologies that they are exploring. 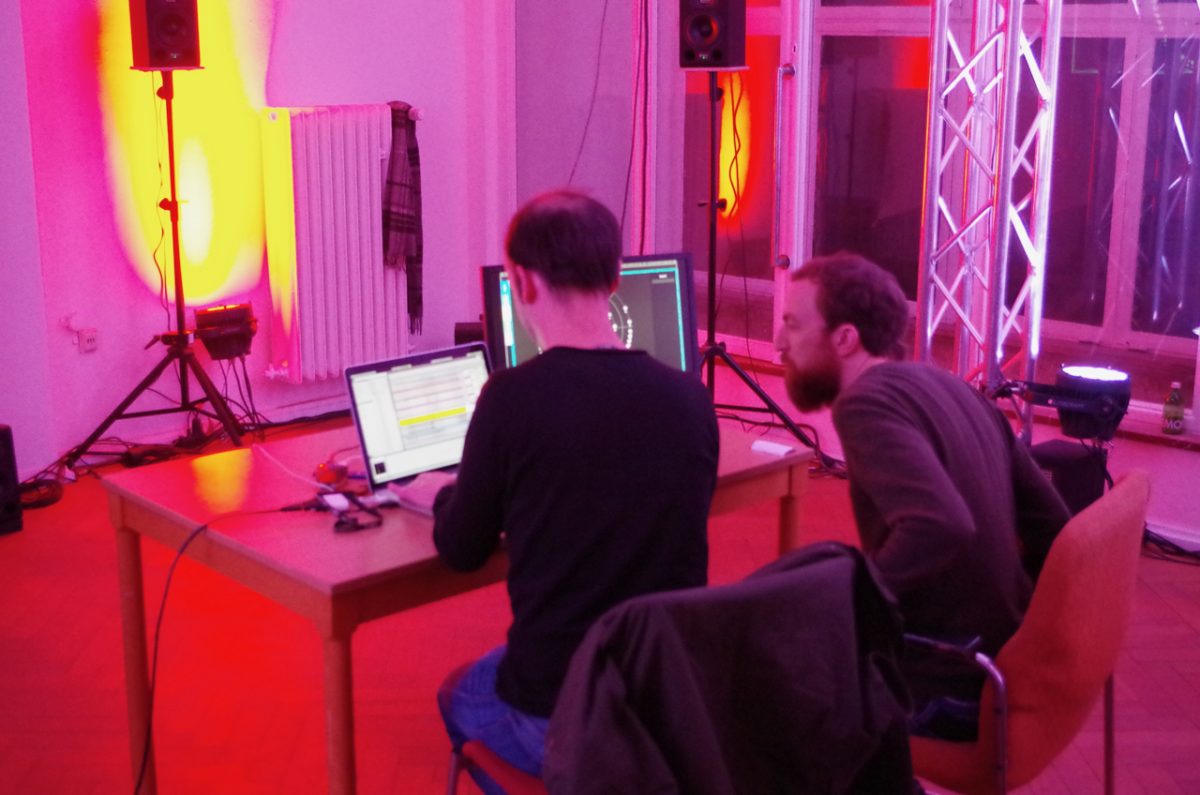 For Live gurus, though, there were plenty of opportunities to do some deep learning.

There were also workshops where you could try new things, like getting started with synth DIY, how to work with a modular synth or how to started with Max.

There were also several studios, like the one above, that were stocked with gear and available for open jam sessions.

In various locations throughout the Funkhaus, there also were interesting installations. These ranged from interactive music installations to virtual reality musical applications to a massive Robert Henke audiovisual installation.

You could get a sense of the piece in a few moments, but the longer you watched and listened, the more details you could see and hear, and the more connections you could make between the audio and visuals:

Here’s a video, documenting Fragile Territories at a previous installation: 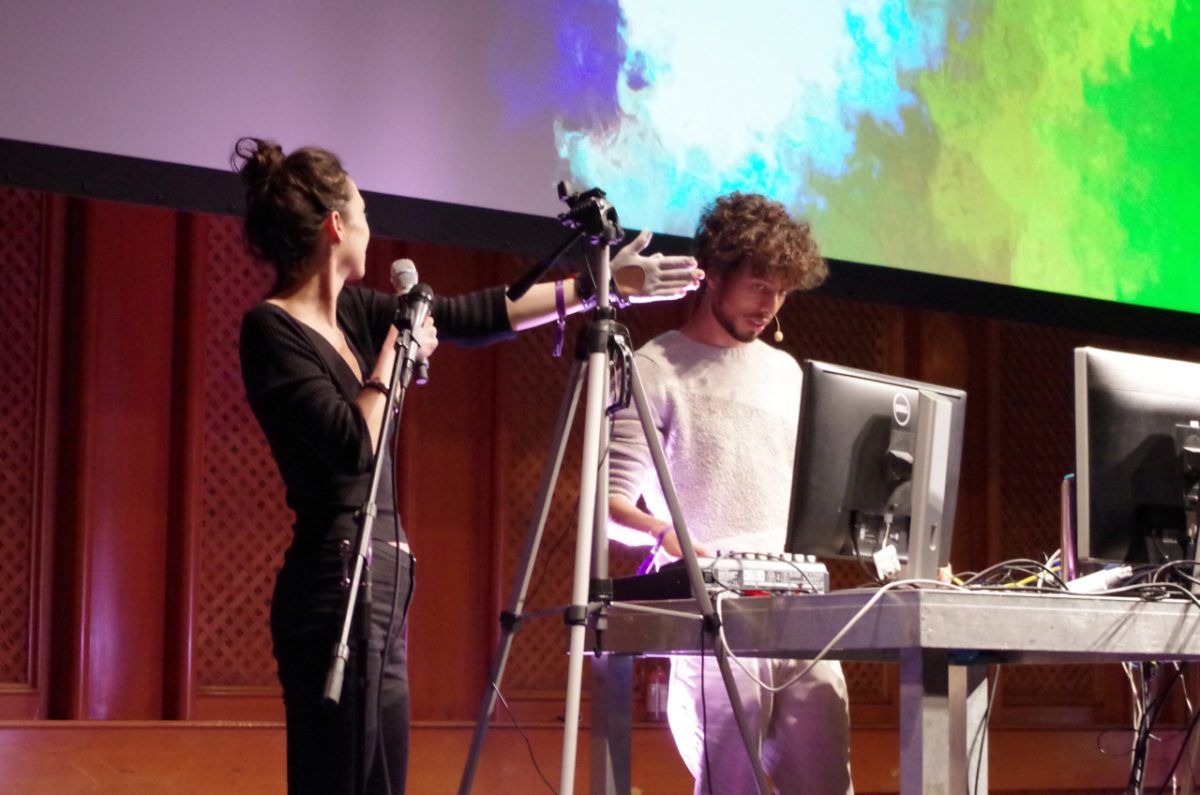 The organizers scheduled a group of speakers and performers that was amazingly talented, and wonderfully diverse. There wasn’t a token ‘Women in Music’ or ‘New Voices’ session – the sessions just included an interesting mix of people that are leaders in their field.

For example, a session looking at Open Hardware for Audio was hosted by Nigerian-born producer Tony Nwachukwu, and featured:

Subotnick gave a riveting surround sound performance that demonstrated that, even after 50 years, his vision of electronic music still is forward-thinking and challenging.

Dub pioneer Lee ‘Scratch’ Perry was featured in a discussion about his music and art that was alternately provocative and completely bizarre – and then he lit up the night with his band Subatomic Sound System:

Another session, Art of Interface, featured a group of designers talking about their approaches to user interface design for synthesizers:

Again, the panel featured a group of people that are leaders in their field:

Another aspect of Loop’s sessions that we liked is that the organizers paired discussion sessions with performances. So, you’d learn about the performer’s approach, their tools or their experiences and then see them in action.

An example of this is the From Studio To Stage session.

It featured three performers – Kimbra, Daedulus and Quantic – who each discussed their live performance rig and their reasoning behind selecting the tools they use.

None of them played anything looking like traditional instruments – which creates challenges for both performers and audiences. The performers discussed how they tailored their rigs to allow them to effectively communicate with audiences when they perform. And the discussion was immediately followed by an improvised set, so you could see how the performers’ decisions about their tools allows them to create engaging and expressive performances.

In another session, mi.mu gloves co-developer Adam Stark gave an overview of the technology behind the new MIDI glove controllers. He was followed by Chagall, who gave a hypnotic solo performance, using just her voice and the gloves. 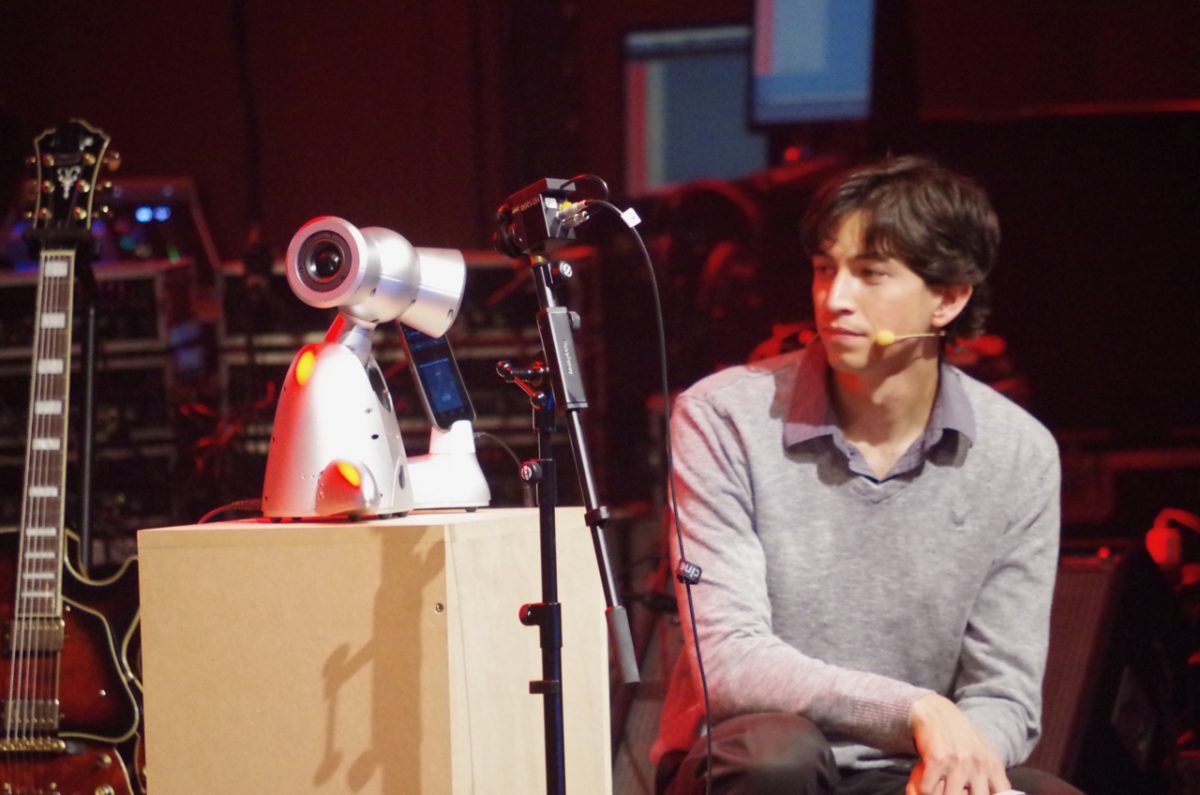 The group discussed how they are using artificial intelligence and machine learning to create systems that can work with music. They’re also applying this research to creating anthropomorphic robots that can perform live with human musicians.

They demonstrated how they are using AI to create software that can analyze music, ‘understand’ the underlying music theory and then apply it to musical tasks. For example, they showed how they could analyze a piece of music by John Coltrane, Giant Steps, and then have their system apply Coltrane’s harmonies to a new melody. And they showed how they built on this, creating music robots that could listen to a performance and bob their ‘head’ to the beat, play musical call and response games and even act as a musician within a jazz ensemble. 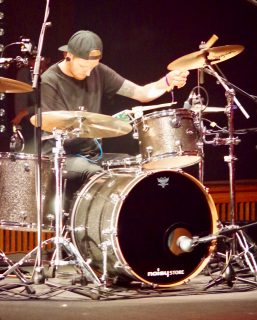 Then they took things to the next level, introducing Jason Barnes, a drummer and an amputee that they’ve been working with to create a robotic prosthesis that lets him drum in new ways.

The robotic arm can work as a replacement arm, letting him strike drums with his right limb again. But the robotic arm also can do things like play inhuman rhythms using two sticks at a time, ‘listen’ to what he’s playing and offer intelligent accompaniment and play polymetric rhythms in sync with the rhythms he plays with his other limbs.

There was no doubt that this was cutting edge stuff – because the Georgia Tech group finished off the session with a live performance, combining human performers, robots and human-machine hybrids. And, by the time it was done, one of the robots had slumped into a seeming depression and one of the sticks on Barnes’ robotic arm went out of control, spinning 360 degrees in an impressive display.

The future may be cool…..but it’s a work in progress. 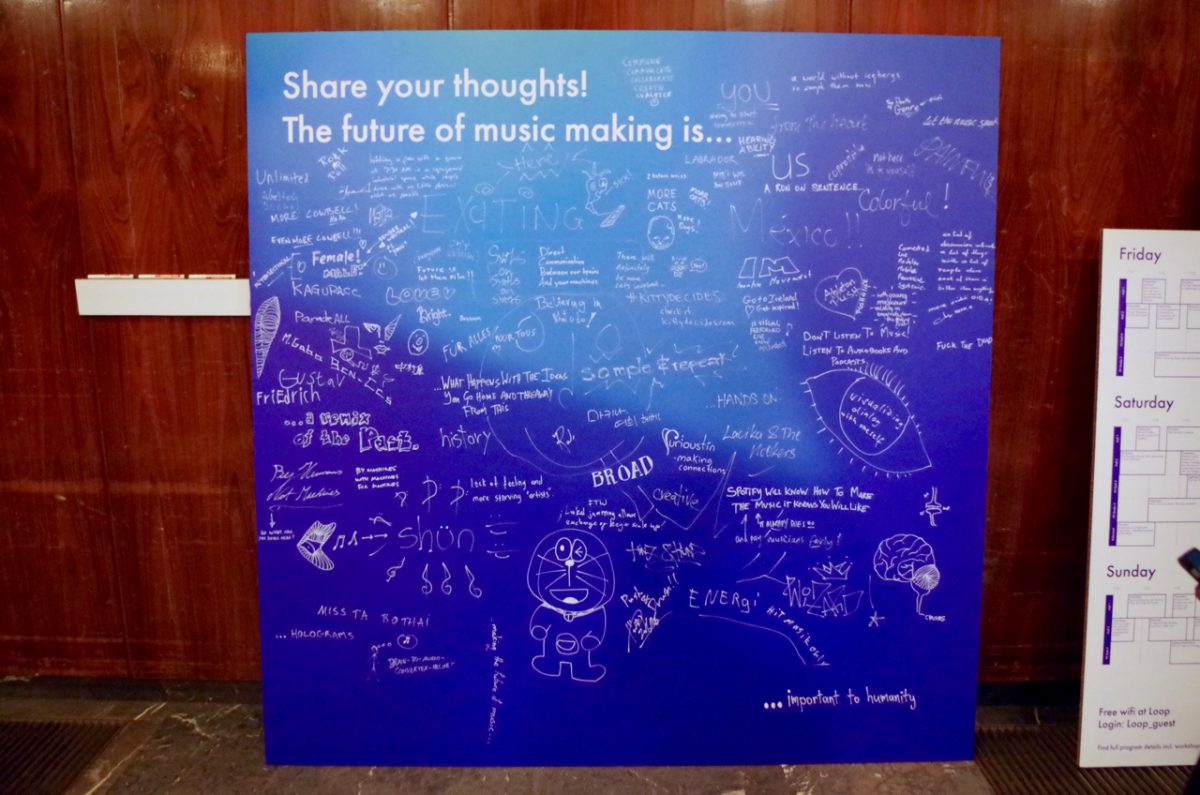 At events like Loop, some of the highlights are the unplanned encounters that happen in the lobby and halls between sessions and at the end of the day.

Organizers had set up several bar areas where you could get refreshments and beer, which provided lots of opportunities to meet with performers, session experts and other attendees.

Attendees that we talked to included musicians, hardware developers, audio programmers, trainers, an audio tour producer and a poet. And everyone we talked with was very impressed by Loop.

If you look at the Loop 2016 Facebook group – you’ll find a stream of comments raving about the event.

Music educator Matt Gooderson came away ‘massively inspired by the weekend in Berlin’. Producer Marco Spaggiari said “This experience really changed my life. It feels great to know that there’s so many like-minded creative people out there.”

We asked producer and sound designer Francis Preve what he thought of Loop, and he was impressed, too.

“It was … like a visceral TED event, with a real sense of community – housed in a magical space, Funkhaus, that transcended the imagination,” said Preve. “Based on every conversation I had with the other attendees, Loop truly inspired everyone to go home and start really pushing the boundaries of their creativity.”

You can lump us in with the people raving about this year’s event. We hope that we can return for Ableton Loop 2017 and that we’ll see some of you there.

If it returns to the Funkhaus, we’d like to see improvements in lighting and accessibility, and perhaps some maps added in common areas, to quickly orient you within the sprawling venue. Beyond that, though, we hope that the organizers can build on the success of this year’s event.

If you made it to Loop 2016, leave a comment and let us know what you thought!