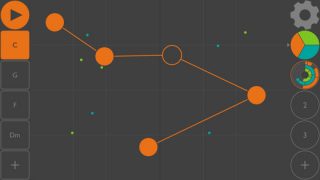 The update adds iPad support, as well as clock synchronization options. You can now use Ableton Link, MIDI Clock, or Inter-App Audio Sync as a clock source for dot Melody. This allows for new ways to connect the app and integrate it into your musical workflow.

Here’s what developer Ben Kamen has to say about the updated dot Melody:

“Dot Melody was the second iOS app I created, and was a sort of experiment in visualizing musical information in an atypical way.

Instead of thinking of music as flowing left-to-right like in many languages and sequencers, the app places notes on a two-dimensional grid, in which note duration corresponds to vertical location and pitch to horizontal location. The underlying pitch grid can be dynamically changed with chord buttons on the left of the screen, while new patterns are generated with pattern buttons on the right.

“In all honesty, I had no plans to update this app. Initial response to the app ranged from confused to outwardly hostile. I get it. The app is kind of weird and limited.

However, I’m currently working on version 2 of Chordion (originally released in 2012), and I’ve had the chance to revisit some technical problems that I wasn’t previously able to solve. As a result, I’m finally able to add support for Ableton Link and other sync technologies to dot Melody.

I think that this greatly expands the usefulness of the app how it can integrate into a larger studio context.

I’ve been having a lot of fun setting it up with Link and using dot Melody as a MIDI sequencer for my modular synth, while using Patterning to make beats.”

dot Melody is available for US $3.99 in the App Store.