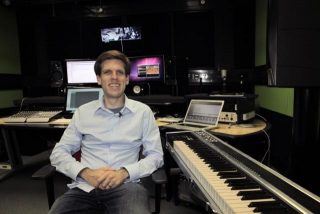 We followed up with McPherson, to find out more about the TouchKeys’ origin and how they work.

TouchKeys, originally introduced via a Kickstarter project, are touch sensors that can be added to the surface of any standard keyboard. They measure the location of your fingers, while retaining the familiar keyboard action. They let you add vibrato, pitch bends, timbre changes and other expressive effects to your playing.

In this interview, McPherson explains how the TouchKeys work, and shares his vision for the future of electronic music instruments.

Synthtopia: Andrew – what can you tell us about your background? What’s your ‘day job’?

Andrew McPherson: I’m a Reader (Associate Professor) in the Centre for Digital Music at Queen Mary University of London. I run a group there called the Augmented Instruments Laboratory, a team of PhD students and postdocs working on digital musical instrument design, human-computer interaction and embedded hardware systems.

Andrew McPherson: I’m a composer and electrical engineer by training. At MIT I was a double-major in both subjects, and I did a PhD in music composition at the University of Pennsylvania.

For many years I was doing music and engineering in parallel, without much overlap between them. Obviously there are so many ways these fields connect to each other, but it wasn’t until the last year of my PhD in 2009 that I found my own angle. 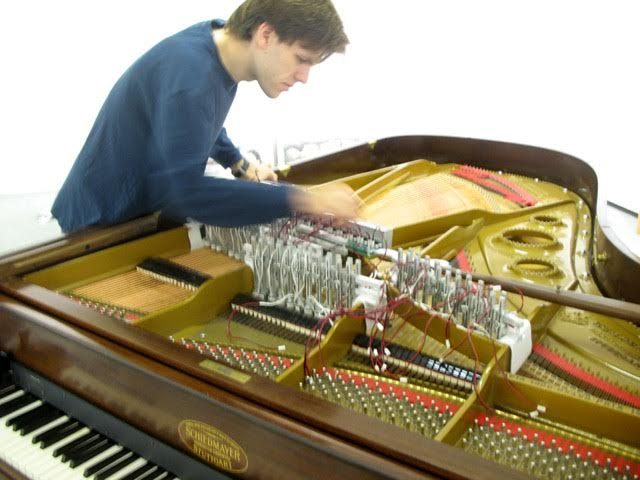 In 2009 I created the Magnetic Resonator Piano (MRP), an electromagnetically-augmented acoustic piano that lets the player continuously shape the pitch, volume and timbre of every note. All the sound comes from the strings and soundboard with no speakers.

I’m a composer and viola player, but not much of a pianist, and I found composing music for piano to be incredibly challenging. So I thought by changing what the piano could do, it wouldn’t necessarily be “better” in any conventional sense, but it would be a unique creative angle for my own composition.

That was the start of my interest in augmented instruments, and since then it’s come to be a central focus of my career.

Synthtopia: What’s the origin of the TouchKeys idea?

Andrew McPherson: TouchKeys started as an idea coming from my experience with the magnetic resonator piano. I was looking for ways to continuously shape the sound of each note as I might on a string instrument.

It turns out that the synth is very rarely the limitation. In the case of the MRP, the magnets can make quite a range of sounds which can be adjusted in several dimensions. The limitation is the performance interface: how do you make something that gives the player a lot of detail, but is still familiar and usable enough that anyone will play it?

A major focus for TouchKeys, then, has been to retain all the familiarity of the piano keyboard but add new techniques that are easy to understand and play. That’s partly why TouchKeys installs on existing keyboards: you can keep the action and features of an instrument you like, while adding touch sensitivity to the surface.

Synthtopia: Can you give me a quick overview of the TouchKeys’ development as a KickStarter project and what’s happened in since it completed?

Andrew McPherson: When TouchKeys launched on Kickstarter in 2013, it had been in development for 3 years and undergone several design revisions, in response to feedback from players. The campaign raised 155% of its original goal, and I shipped kits to musicians in about 20 countries.

I made a couple more improvements to the hardware during and after Kickstarter, including some subtle but important changes to the feel of the edges of the sensors. I’ve also added features to the software and more recently have made a version of the hardware that supports MIDI I/O directly, without needing to connect to a computer.

On the commercial side, the Kickstarter project originally ran through the university where I work. In the period after Kickstarter, the project continued (including a new production run in 2015) but I didn’t invest as much effort in publicity, since I was sharing my time with other research and teaching.

But now we have spun out a company, TouchKeys Instruments Ltd, to take the project forward. I’m excited about it because it will let us scale up our activities and development!

Synthtopia: How do TouchKeys work, technically?

Andrew McPherson: TouchKeys can be powered by USB or, if you’re using the MIDI I/O board, any other 5V source.

The sensors measure the XY position and contact area of the fingers on the key surfaces. You can measure up to 3 fingers on a key, with very detailed resolution: about 0.1mm in space and 200Hz scan rate.

This data goes to the computer where the software merges it with MIDI from the host keyboard, and generates new MIDI (or OSC) messages for the synth. This could go to a soft synth, or back out to MIDI hardware, and it replaces the original MIDI from the keyboard.

The mappings are modular and flexible — you can map any dimension of touch to any MIDI parameter, and there are some mappings like Vibrato and Pitch Bend that are fine tuned for the gestures of keyboard playing. For example, the vibrato mapping is able to distinguish between deliberate vibrato gestures and unintentional motions associated with moving the hands from one key to another.

There are a couple other options, too.

The standalone MIDI I/O board lets you connect your keyboard directly to TouchKeys and then connect the output to a hardware synth, with no computer involved. Or you can use TouchKeys in standalone mode, where they’re not installed on a keyboard at all, but MIDI notes are triggered when you touch the sensors. You don’t get velocity information that way but you still get quite a lot of detail on position and contact area. 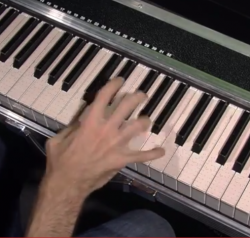 Synthtopia: What other considerations do people need to consider when it comes to using software or hardware with TouchKeys? What other requirements does the receiving synth need to support in order to take advantage of TouchKeys’ range of expression?

Andrew McPherson: The USB connection to the computer is the usual way of working with TouchKeys. You can still use MIDI hardware via the usual USB-MIDI converters. The MIDI standalone option is new. It doesn’t replicate every feature of the software, but the most important mappings are there.

The software supports a polyphonic note-per-channel mode that is similar in concept to MPE (Multidimensional Polyphonic Expression). If the synth doesn’t support multiple MIDI channels, there are a couple single channel modes, one for monosynth playing, and one that is polyphonic but uses only one MIDI channel. That doesn’t give you per-note pitch bend, but you can still use messages like polyphonic aftertouch for per-note expression.

I am working on MPE support at the moment, and I hope to have it ready in the next software release.

Synthtopia: What distinguishes the TouchKeys, compared to other expressive MIDI controllers that are currently available?

Andrew McPherson: There are some really great controllers on the market right now. What sets TouchKeys apart is that it retains the familiar keyboard action. You can learn the new TouchKeys techniques without having to learn a new underlying instrument, and if you want, you could even turn off the touch sensitivity and you’re back to a completely familiar keyboard. I find the mechanical action of the keyboard really important, especially for sounds like pianos and percussion where precise control of velocity matters a lot.

Beyond that, TouchKeys is quite responsive and sensitive. You can get over 1500 points of resolution on the long axis of each key and the 5ms scan interval is pretty fast. I also like the ergonomics of capacitive touch sensing — I find it easier and less tiring to slide my fingers along the keys than to use pressure aftertouch.

Of course, the mechanical keyboard action comes with some constraints. It’s not as easy to glide across an octave of notes like you might on a more continuous controller, though you can do pitch bends up and down each key. If you use a keyboard with aftertouch, you can get some extra modulation through key pressure, but other controllers like the Seaboard make pressure a much more integral part of the playing technique.

I would never say that one single controller could be perfect for every sound and every technique, so it’s really a question of your priorities.

Synthtopia: Are there other things about the TouchKeys that you think Synthtopia readers should be aware of?

Andrew McPherson: One of the most fun parts of this project has been seeing how people use TouchKeys in their own music. It’s always neat to see people share video or audio they’ve made with it, and feedback from the community helps shape the next steps for the project.

The TouchKeys software is also open source (GPL), so others can contribute their own ideas, or port it to other platforms, if they’re interested.

Here are some links for readers interested in learning more about McPherson’s work and other work in the area of creating new types of expressive keyboards:

Never let the lyric get in the way of the groove.